Wellington Zoo has farewelled male lions, Malik and Zulu today, but it won't be forever! 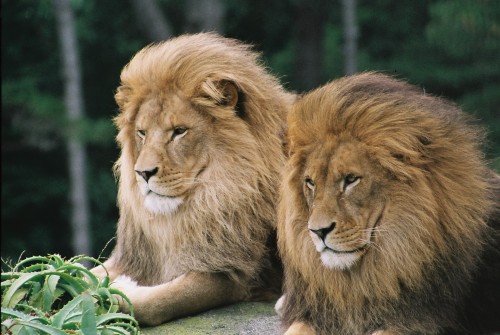 Auckland Zoo welcomed the males to its Africa precinct today, a home-coming of sorts following their births at Auckland Zoo 14 years ago.

In June, Auckland Zoo made the tough but kindest call to euthanase its remaining lions, elderly females Kura and Amira, the respective mothers of Malik and Zulu. Wellington Zoo, also home to female lions, is enabling the half-brothers to stay at Auckland Zoo for a period while it is without a pride. Both Wellington and Auckland Zoo work closely together on a range of projects and we are both part of an international zoos’ breeding and advocacy programme for lions - a now ‘Vulnerable’ species whose numbers have reduced dramatically over the past decade.

“We’re very excited to be working with our Wellington colleagues to once again make it possible for locals and visitors to Auckland to connect with, learn about and support these magnificent big cats. It’s so important to advocate for them, as many people don’t realise they’re doing it tough in the wild as people increasingly encroach into their environment,” says Auckland Zoo Carnivore team leader, Lauren Booth.

“What’s very special for us keepers and our long-time visitors, is that we’re welcoming these two particular lions. Being the sons of Kura and Amira, it’s going to be lovely to have that connection with them. We’re really looking forward to seeing if there are any similarities between the boys and their mothers, and with the help of Wellington Carnivore Keeper Anders Muller getting to know them and settling them in to their new ‘old’ surroundings where they spent the first eight months of their lives,” says Lauren.

Malik and Zulu are very charismatic lions and will be missed at Wellington Zoo, but we are thrilled that the Auckland community will be able to connect with the males and learn more about this incredible species. Malik and Zulu share a wonderful brotherly bond that you can clearly see when they’re together. It’s great that they travelled to Auckland Zoo together, accompanied by one of their keepers, Anders, and a Veterinarian from Wellington Zoo who was with them every step of the journey to Auckland.

While the males are spending a period of time at Auckland Zoo, our females, Djane, Zahra and Djembe will remain at Wellington Zoo to continue to be advocates for their species and help us share their conservation story in the wild.

Malik and Zulu’s journey to Auckland Zoo included a drive from Wellington Zoo to Palmerston North’s airport, then flown to Auckland on a New Zealand Post cargo plane and driven to Auckland Zoo. Sometime within the next two years, as part of the zoos’ international breeding programme for these ‘Vulnerable’ (IUCN Red List of Threatened Species) big cats, Auckland Zoo will welcome young female lions (and later young males) to once again breed lions.

In the meantime, Auckland Zoo visitors can look forward to seeing Malik and Zulu in the Africa precinct’s lion exhibit where from some great vantage points, these big cats can view visitors and other African wildlife including, rhino, nyala, zebra, giraffe, ostrich, guinea fowl and flamingo. If you are planning to visit Auckland Zoo soon, please be aware that Malik and Zulu are at the moment still just resting after their big journey north and settling in to their new home, so may not be visible. Be sure to check Auckland Zoo’s social media channels for updates.