My name is Deleece Mclaren and I am one of the Zoo Keepers here at Wellington Zoo. Every year Zoo staff have the opportunity to take an extra week of paid leave to give back to a conservation organisation of their choosing.

In September I spent a week with one of New Zealand’s endemic penguin projects, The Tawaki Project. 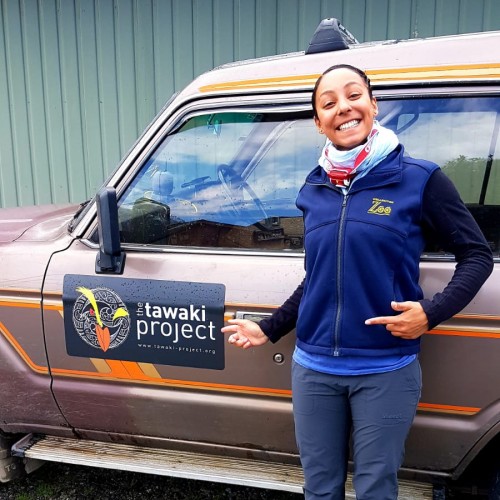 The Tawaki Project is operated by a number of skilled researchers and conservation enthusiasts, including Thomas Mattern and his wife Ursula Ellenberg, who I had the pleasure in working alongside. Additionally team members were Robin Long who grew up alongside Tawaki in the South Westland and a master’s research student Myrene studying the two nest sites in Milford Sound for comparisons.

Tawaki are under-studied and The Project's research is vital to assess their marine ecology, breeding and population long-term. The Tawaki Project aims to promote conservation of the Tawaki as it is not yet known exactly the potential impact humans have in regards to, fisheries activity, pollution of marine habitat, or on-going climate change. These are much the same as threats faced by other penguins that inhabit New Zealand territory; including Hoiho Yellow-Eyed Penguins and Kororā Little Blue Penguins, which can even be spotted around our Wellington coastline. 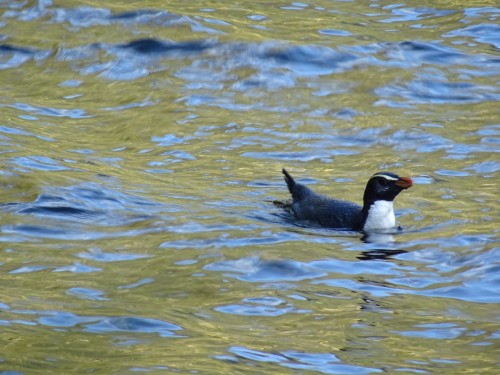 Making it through the other side

Milford Sound, located in heart of Fiordland on the South West Coast, is by far one of the most breath-taking sceneries, I’ve had the privilege to experience. Due to avalanche risks, the road was frequently closing and re-opening, so timing was crucial to be able to ensure I could participate in my week's conservation leave. 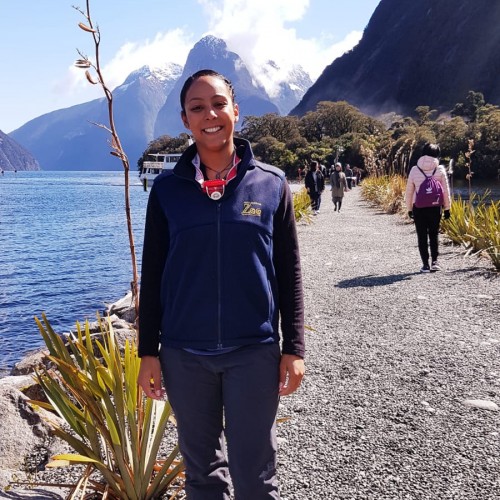 Arriving early I was able to meet up with the team and find out what the following week would have in store. I was briefed on the logistics of how we would be getting to each site, and the work involved once there. Each location was only reachable by boat; a trip most people do at least once during their time in New Zealand. I was fortunate to do the journey every day for the duration of my leave! I got to really experience the beauty it had to offer, thanks to the Southern Discoveries team, who support the Tawaki project and not only kept us well fed, but transported us to and from sites.  They also ensured we had the kayaks as a means to travel from the discovery centre to Harrison Cove nesting site, one of the more researched sites. 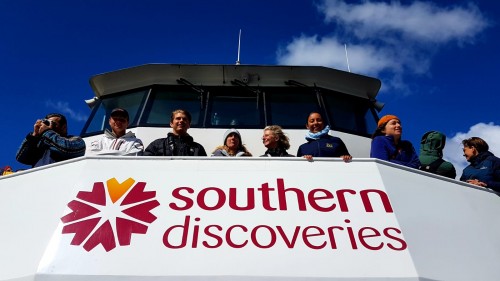 Deleece and the Tawaki Project team on the Southern Discoveries boat

Harrison Cove is accessible only from the floating discovery centre in the middle of The Sounds via kayak. This is one of the more researched sites; Ursula showed me around the nest sites and explained the process for identifying suitable ‘logger’ nests.

Tawaki opt to nest deep amongst either tree roots or amongst ‘cave like boulders’, which meant getting down and very dirty crawling into small places to examine them. There was an ideal criterion where it needed to be fairly easily accessible, with limited to no exits, so that the loggered birds can be easily retrievable. This was made a little bit difficult as a delay in the start of the project meant many of the chicks were already in post-guard. This meant only the male was present during the day and the female spent more time out at sea, foraging and wouldn’t return until early evening/late at night. Once these were pinpointed, we then scoped the area for any potential new nests, looking for any tell-tale signs (faeces, urates, well-trodden path), to my luck I discovered a new nest site which did have both parents (and later discovered a young chick). 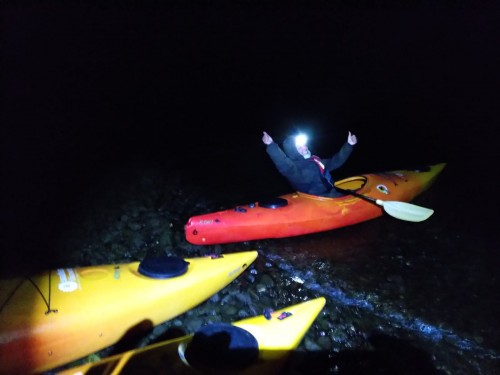 Deleece and The Project team heading out on kayaks

Once logger nests were identified we waited until evening for the females to return, this could be anytime from 5pm to…12am. Frequent checks were made if mutual calls were heard from the logger nest localities, which indicated that the female may be back from foraging. Approximately 15mins after hearing the calls (to allow female to feed her chick) we would check to see if she was there before she left. The bird was then manual restrained using a specialised bag design which enabled scales to be attached for weight, feather samples taken and the head to be released (whilst body restricted) to take beak dimensions. The bird was scanned using a transponder to see if it had already been ID’d with a microchip and tagged accordingly. Loggers could then be attached carefully to the backs of the females which can last up to 5days. They are specially designed to correct dimensions and weight requirements for Tawaki, to not hinder the bird in anyway, so they are still able to behave normally both on land and in the water. The loggers are salt water activated, and switch on when the bird first enters the sea. They are a nifty piece of equipment which records data on things like the distance the bird travels out to sea and dive depth. This gives a visual representation of the localities the females are foraging during the breeding season, in order to sustain themselves and their chicks. The loggers are colour coordinated using waterproofing tape and documented within a database programme for easy visual identification when the time comes to retrieve them.

The database accounts for all marked birds, e.g. records of their microchip number, gender, and nest site location and beak dimensions. A camera trap is setup outside the logger nest, to record when the female is returning/leaving and gauge general behaviour of the animals at the nest entrance.

Each night we returned via kayak which on a couple of occasions was spectacular under a starry sky to the discover centre and camped the night. On the penultimate day of my trip, we would be going directly from the centre to Moraine, a less researched site to spend the night completing research and sleeping amongst the forest!

A much more rugged and challenging landscape, we arrived by boat and jumped ashore and found a suitable place to set up camp. After breakfast around 9am, we ventured to the main landing area of the penguins to set up a camera trap to document the comings/goings of the penguins.

Deleece ready to set off and find Tawaki nesting sites

We then followed the course upstream, splitting off (within calling distance) to find suitable logger nests. Unlike Harrison Cove, there was also the challenges the forest threw at you. As beautiful as it was, it's a different experience moving around especially through the vines. However it was made worthwhile as there was a plethora of nesting sites, so finding them wasn’t as challenging but finding a suitable candidate was!

Some of the nests here were several meters deep, with many entrances/exits or even require shuffling until only your knees were visible. These nests were then marked using cow tags, so that we could find them again easily once it was dark. We found 9 in total to choose from later on, we then circled the route again during the daylight to get a more mental map…needless to say I thought I had it mastered but once it was dark, It was a whole other world.

The sky was clear and starry again and the glow worms were out in force, making it feel as though you were in a globe. We went back to each site and loggered the females upon return, using the same technique as Harrison cove. Around 2am we loggered the last bird (we managed 4 females) and returned back to camp after a 15-hour day, for a well-earned rest. 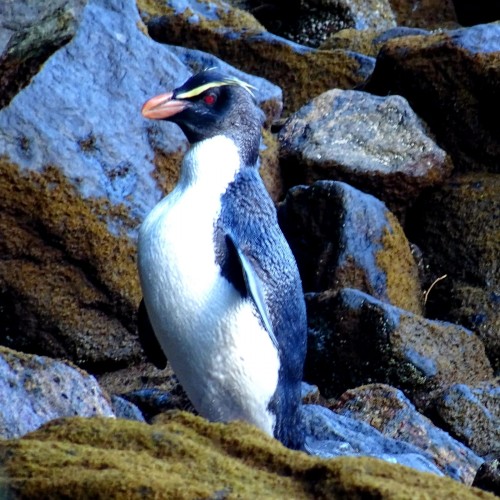 Overall this was a fantastic learning experience to assist in, contributing in my small way to science. I would like to thank all of the Tawaki project research team and Southern Discoveries for an extremely valuable learning experience and opportunity to gain knowledge in the work you pride and for giving me a memorable experience I can share back at Wellington Zoo. I would also like to thank the Zoo for the given opportunity of conservation leave to take part in a worthwhile project.