Wellington Zoo Visitor Ranger Anna McKenzie-Pollock is heading to Tasmania this month to help release a population of endangered Tasmanian Devils back on to the Forestier Peninsula as part of conservation efforts to save Tasmanian Devils from extinction. 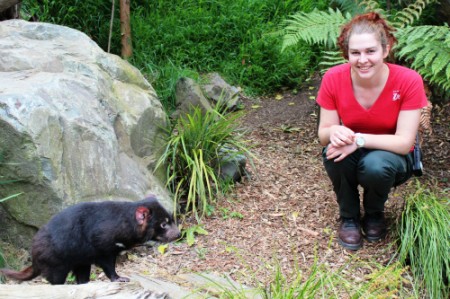 The Save the Tasmanian Devil Program (STDP) is a Tasmanian government initiative established in 2003 in response to the threat of Devil Facial Tumour Disease (DFTD) – a rare contagious viral cancer that has spread rapidly through wild Tasmanian Devil populations, reducing their numbers by approximately 80%. STDP collaborates with research institutes and zoos worldwide to combat the disease and ensure their survival. Zoos have played a crucial role with STDP to save the species from extinction in the wild, by holding and breeding wild and semi-wild healthy Tasmanian Devils as an insurance population.  Now moving into the next phase, STDP is developing the Wild Devil Recovery Program to establish significant disease free populations in the wild.

“The Tasmanian Devils that we look after at Wellington Zoo were the first I had ever seen in real life, and as soon as they arrived I found them so endearing and lovable,” said Anna.

“I had read all about DFTD and the decline in their population, and I wanted to do what I could to help the species.”

DFTD was detected on the Forestier Peninsula in 2004, and surviving animals were trapped and removed from the area in 2012 to eliminate all traces of the disease.

Now, after three years of monitoring the Peninsula, they plan to reintroduce Tasmanian Devils there in November 2015 – hoping to see them thriving in the wild once more.

“During my time there I will help with the actual release, along with preparation like removing infrared cameras from the pre-reintroduction survey and setting up supplementary feeding sites.”

“I’m excited that thanks to my wonderful workplace I’m able to travel to Tasmania and help out with such an important project,” she added.

Anna will be blogging about her devilish adventures at wellingtonzoo.tumblr.com.

“We’re contributing to Tasmanian Devil conservation by providing space for healthy animals in New Zealand, who are fantastic overseas ambassadors for their species back home.”