With support from the Wellington Zoo Conservation Fund, Herbivore Keeper, April Turnbull has been in Namibia to work alongside the Giraffe Conservation Foundation (GCF) in the field, to contribute to behavioural research of the Angolan Giraffe species and learn all about their conservation. 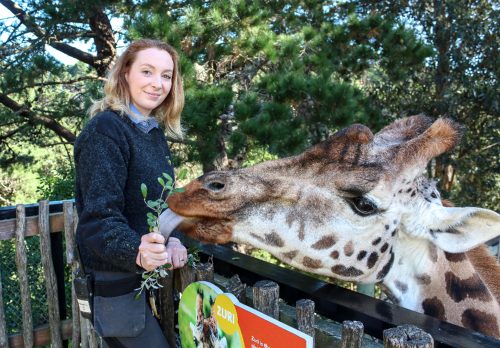 April with Zahara, one of the female Giraffes at the Zoo

Words cannot explain the beauty and fragility of North-West Namibia. It is one of the most breath-taking places I have had the privilege of experiencing.

Giraffes are facing a silent crisis. They have suffered a 40% decline in their population numbers over the last 30 years. Less than 100,000 Giraffe now remain in the wild. The most frightening thing about these statistics is that not many people know about their plight.

After a 28 hour journey on the plane, I finally arrived in Windhoek, the capital city of Namibia and was greeted by some familiar faces; fellow Kiwis and ex-zookeepers who had recently moved to Namibia to support the GCF. I had one full day to myself before heading into the field, which I spent taking in the local sights and sampling some of the local delicacies. 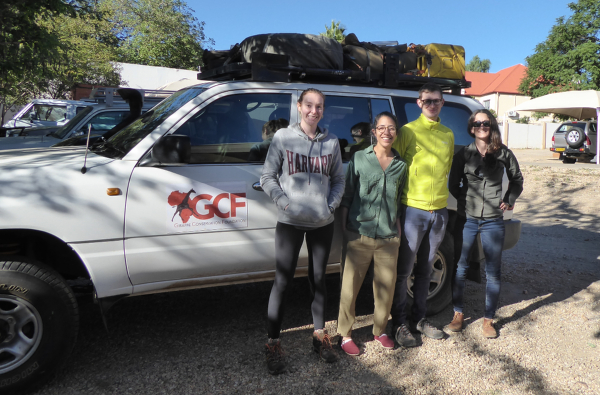 April, volunteers and Emma from GCF, preparing to leave the main office

The next day the adventure truly began. Emma Hart, the lead researcher for the trip collected myself and two fellow volunteers early in the morning and before we set off, we made a quick stop off at the GCF main office to collect all the essentials for the trip. We loaded up the data equipment, our tents and jerry cans for water and fuel, food etc. in the land cruiser - which felt like a real-life version of Tetris, camping edition! We then headed out to the open road, North West to our first research area which was going to take two full days of driving, so we broke the journey by camping at a beautiful campsite called Hoada. It was a long day of driving, but the scenery made the trip fly by. I was constantly making noises, pointing, twisting my neck and gasping at the animals and landscape along the way. We saw Impala, Warthog, Vultures, Rock Hyrax, Lizards, Springbok and a myriad of birdlife. Needless to say, I was in Zookeeper heaven.

A herd of wild Springbok we saw along the way

The next morning, with the tar seal road well and truly behind us, we carried on our journey North West through the Grootberg mountain pass and onwards to the Obias tributary of the Hoanib River, home to around 80 Giraffe and our home for the next five nights. We set up camp and wasted no time, heading straight out into the river for a quick afternoon survey. The rivers here only flow for a few weeks during the rainy season, so when I refer to us “in” the river, I do literally mean driving in the river.

The research we were undertaking was surveying the Giraffe populations within two river systems, the Hoanib and the Hoarusib. We drove through the river looking for any evidence that would point to Giraffe activity such as hoof tracks or faeces. You may think spotting a Giraffe would be easy given their size and enormous presence right? Wrong. They are so perfectly designed for their environment that they blend right in. Sometimes all you would see was an ear poking out of a bush or a tail flicking in the distance on what you thought was a tree trunk! 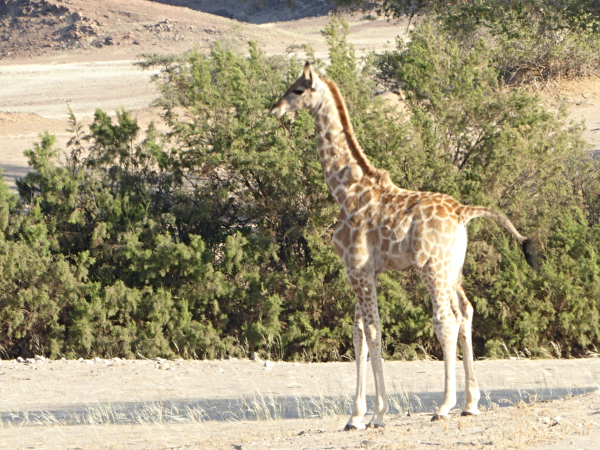 Our first sighting was extraordinary. I was speechless, or at least my speech was incoherent as I was so incredibly excited. It was a 2-month-old juvenile male who still had his umbilicus attached. I got to name him, Wellington. His mother “Wrinkle” was of course near-by keeping a watchful eye.

Once we had spotted a Giraffe throughout our surveying, we would pull up as close as possible and take some photos, noting the sex, whether it was an adult, sub-adult or juvenile and note the GPS coordinates of its location. We would compare the photos we had taken to the previously compiled record books of all known and identified Giraffe within the region. If the Giraffe could be identified, we would note their details, and if not, we would create a new record sheet for the individual when we got back to camp. This entire process would be repeated for every Giraffe we came across and was complicated slightly when we would stumble upon groups of 10 which would not stay still! 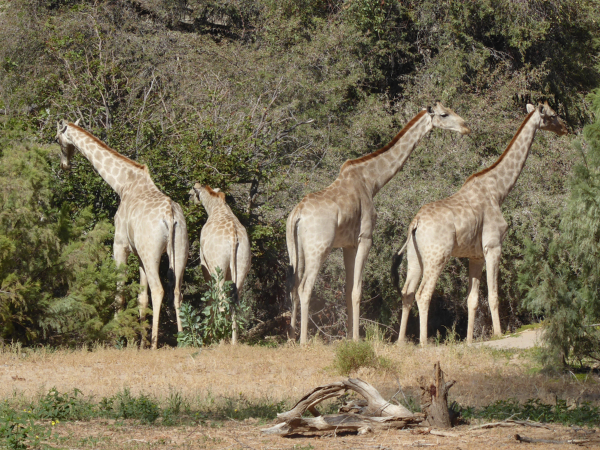 Some of the Giraffes we spotted while surveying

Part of the research we were conducting also consisted of collecting genetic samples for analysis. We were able to achieve this through the use of dart biopsies. Emma would shoot a small dart at the rump of the Giraffe, which would immediately drop out and take with it a small amount of skin. This skin sample would then be preserved in ethanol for later analysis. 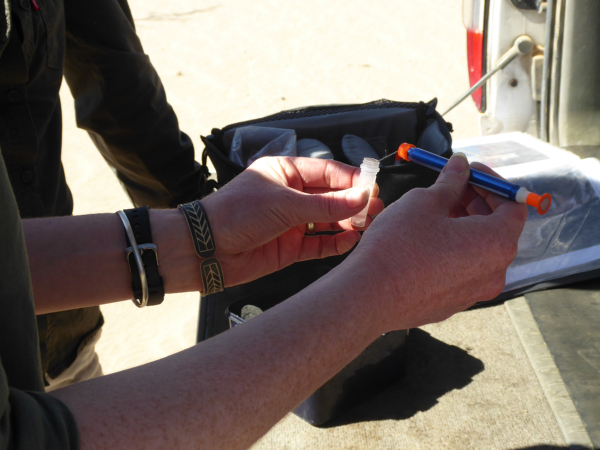 April with a skin sample from a Giraffe

We would change the areas we surveyed each day heading down the river to the floodplains, through the mountains surrounding the Hoanib River, through parts of the skeleton coast and back up the river towards camp. We had many close encounters with Elephants, which we took photos of and noted their GPS location and group composition to add to the Elephant research database. One lunchtime a lone bull decided to hang around on the opposite side of the river while we sat on the back tray of the vehicle happily munching on our lunch!

We're heading to Hoarusib River for our next research area - I can't wait to see the change in the landscape around the area. Stay tuned for my next blog!

Read April's first blog here before she left NZ and part 2 of her reporting from Africa here. 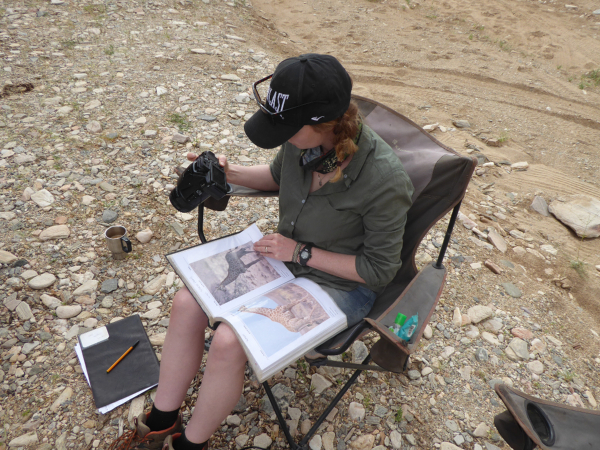