Two sub-antarctic seabirds have been successfully released back to sea after receiving care at Wellington Zoo, with a little help from the Maritime Unit of the Wellington District Police. 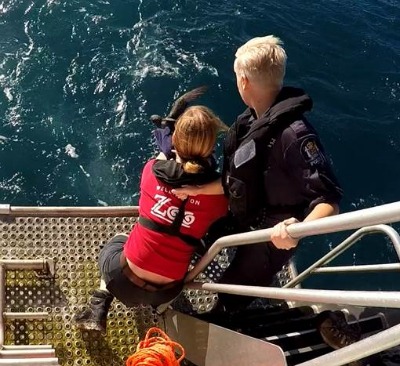 A Kerguelen Petrel and a Northern Giant Petrel that were found just days apart near Wellington by members of the community, were likely to have been blown in during recent storms. After being reported to the Department of Conservation, the birds were treated at The Nest Te Kōhanga for native wildlife veterinary care.

The Kerguelen Petrel was found near Waimea Stream at Waikanae Beach, and it was underweight and dehydrated with bent feathers. Its condition indicated that it was likely caught in some of the stormy weather we have been experiencing lately. The bird was rehydrated and checked for injuries, and then our vet team built up its body condition through quality food.

When the Northern Giant Petrel arrived at The Nest Te Kōhanga, after it was found in Pukerua Bay, it was unable to fly, dehydrated and very weak. A general health check revealed that it was in kidney failure and was anaemic. The vet team were able to treat the bird with fluids for its dehydration and treat the kidney failure and anaemia to get this bird back to full health.

The treatments were not without their difficulties. Seabirds in human care are at risk of losing the waterproof nature of their feathers, so the team had to use towels when handling the birds and give them plenty of time swimming in the salt-water pool to maintain their feather quality.

While there are many seabirds that can be successfully released back on the shore, Giant Petrels usually need a run-up on the water or a certain wind strength to take to flight, so a sea release is ideal for these two birds.