Hi everyone! If you missed my last blog, my name is Melissa Williamson and I am a Vet Nurse at The Nest Te Kōhanga, Wellington Zoo. My day-to-day job back home involves treating both native wildlife and Zoo animals - providing annual health checks, preventive health treatments, and treatment of injuries and illnesses within our varied resident animals and native wildlife. 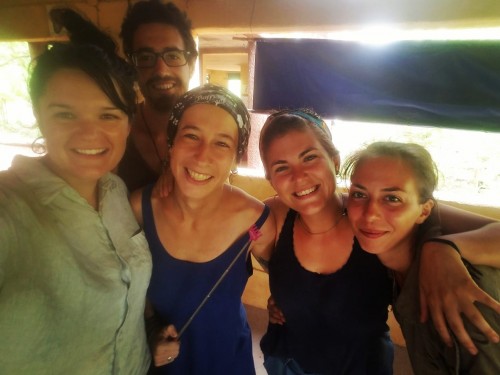 Mel with the research team

I have now been in Dindéfélo at the JGI Biological Station for a few weeks! The organisation has different departments to tackle different issues: Agroforestry, Sustainable development, Research, Conservation, Socioeconomic and Environmental Education, as well as Administration and Communications. I have been partially shadowing the research team, coordinated on the ground by Amanda Barciela from Spain, and staffed with a dozen local field assistants like Samba, Salam and Amadou, who know the forest in and around the reserve extremely well. 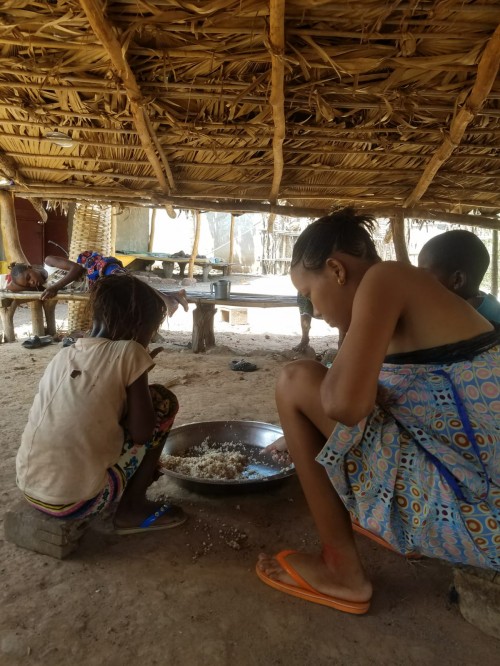 Having lunch with my local family

I am having my meals at the house of a lovely local family, the Diallo’s (actually most families have this surname here), and Salam the father (who is also in the JGI research team) is able to speak some English, which is very welcome.

The first few days I was trained by Amanda on the information to be collected when in the field and the equipment used for this. I was given an overview of the Dindéfélo Commune Nature Reserve and shown the conclusions of their annual research, the results of which are used by the other teams to help in future planning to ensure ideal habitats for the chimp population and the many other species here. For example, the Agroforestry team uses information on chimp locations, nesting, sightings and chimp diet to determine the most appropriate places for reforestation and suitable trees to plant for the chimpanzees; while creating buffer zones or plantations for the needs of the local people. 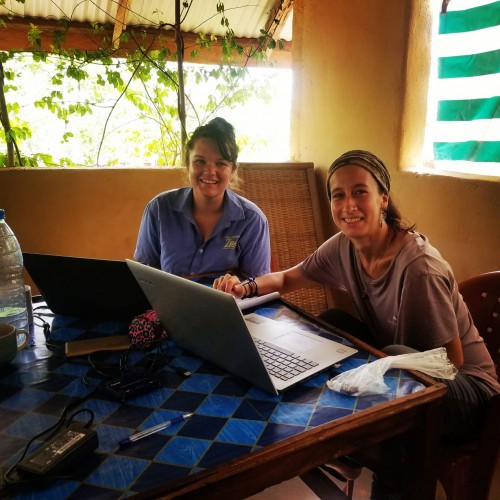 Information is collected using a Runbo - a waterproof and very hardy hand held system which has the capability to plot GPS coordinates and to store and partially analyse the information collected in the field. The information is then transferred onto a computer software system called SMART which allows for further analysis. The data can then be fed back to the JGIS Agroforestry department, which manages the tree nursery in Dindéfélo, which is a haven at the centre for growing many different seeds that are useful to the locals and the forest species, with the aim of being planted back in the forest. Wellington Zoo has been able to donate two of these units to JGIS this year and they will be used to further these studies for 2019 onwards.

Camera trap in the field

My first day out in the forest was an adventure! The locals are amazing with their speed and silence in the forest and with the heat (around 40 degrees) and the hills, it is an exhausting trip! However, the trip was nothing compared to the beauty of the forest. Being able to walk through an environment and see iguanas, snakes, birds, baboons, green monkeys, vervet monkeys and other primates swinging in the vines above you is a privilege, and something that absolutely needs to be preserved. 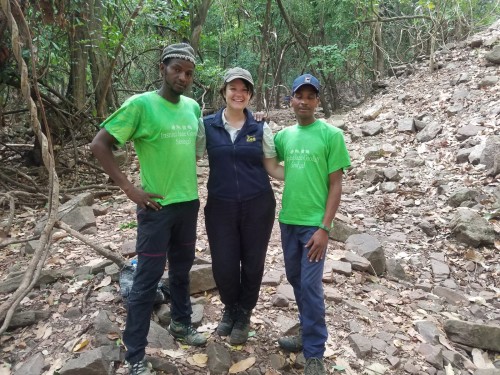 Mel with Amadou and Sala after they saw wild Chimpanzees nearby! 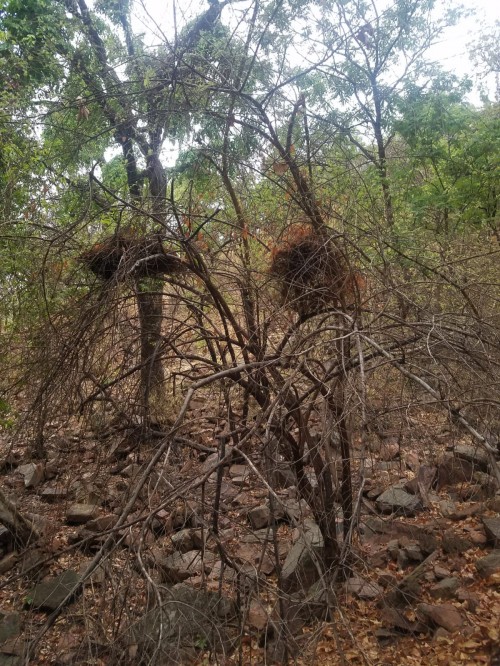 One of the local chimpanzee groups has been spending time in the region nearest to the JGI station for the last 2 weeks which meant on the first day they were very nearby! But crucially, the forest bridges between habitats are dwindling, meaning different chimp groups cannot interact. This is important as with less than 500 chimpanzees in all of Senegal and approximately 70 in the reserve, genetic diversity needs to be maintained between groups. The research allows the team to determine chimp habitats and locations that require replanting to ensure bridges between them remain open. On this day we got 200m from their vocalisations and the field assistants thought it was a group of about 15 chimps! However, they were moving quickly to a new site for food and, unfortunately, we fell behind when climbing a large, very steep slope to reach the plateau where they were heading. They were much faster than we are! But it was amazing hearing their vocalisations so close by.

On the second day in the forest, we could hear that the chimps were no longer in Dindéfélo as there were no vocalisations; so we hiked approximately one hour up a mountain to another village, Affia. We hoped to find the chimpanzees at a nearby waterfall. We did find signs that the chimpanzees had been there the day before as we saw eaten Baobab fruit on the ground and a knuckle print, however no chimps today! 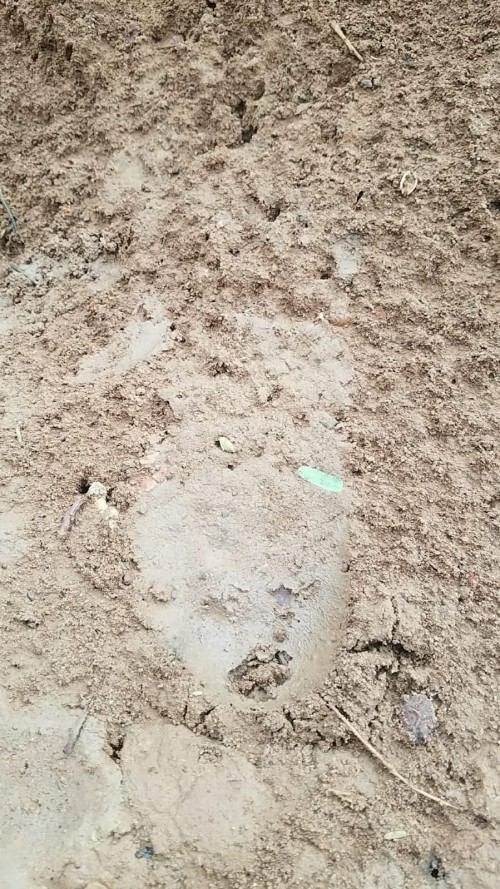 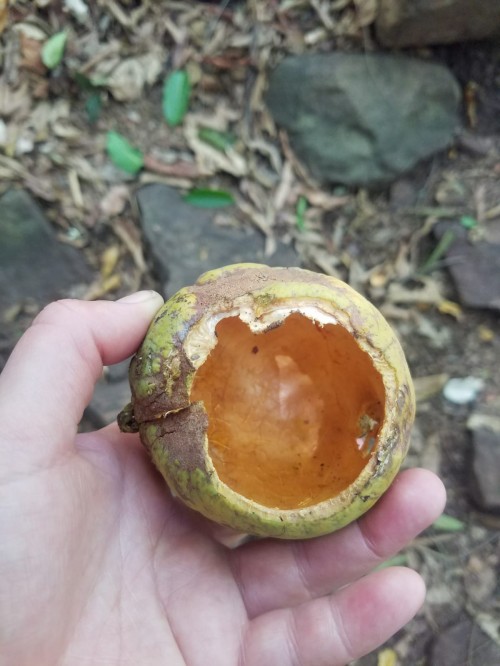 Well-eaten food by a Chimp

Climbing the mountain was fairly difficult for me, but the Senegalese team crossed it like a small hill, and there were many women carrying heavy loads on their heads and babies on their backs, which was incredible to see, and really showed me up! I was told that the school children climb that mountain twice a day to go from their village to the local school in Dindefelo, carrying little brothers and sisters on their backs. 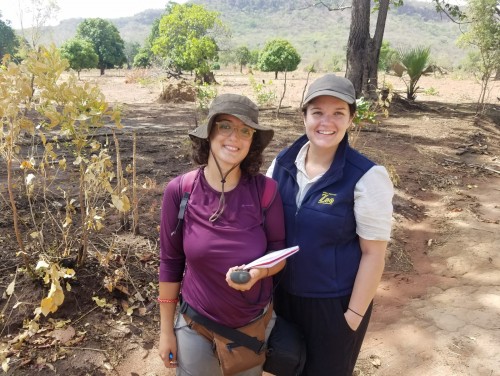 On the third day we biked 10km in the 40 degree heat to and from another village called Segou! I was also travelling with Andrea, who works for the Agroforestry department, and our aim was to map out potential new reforestation sites just outside of the Dindéfélo reserve. This is important as it will offer the local people an alternative to having to enter the reserve to gather food and supplies, such as bamboo, wood and wild fruit. We also stopped on the way home to collect some Bomax costatum, or “diohe” seeds as they are known in the local language, Pular. 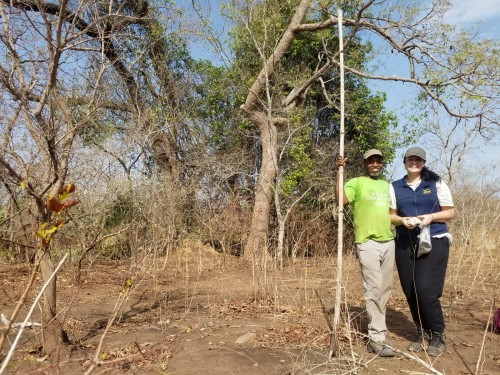 Mel and Delda collecting seeds to grow on the new site

These will be grown in the nursery at the station and then used in the reforestation effort. This is important as this species has a wood that is commonly used for making roofs, fences, furniture in homes etc. Other species that will be planted are those commonly used for food in this area. The location just outside Segou may be a suitable candidate for a reforestation site based on the characteristics of the soil and the species that are already present there, which is very exciting! 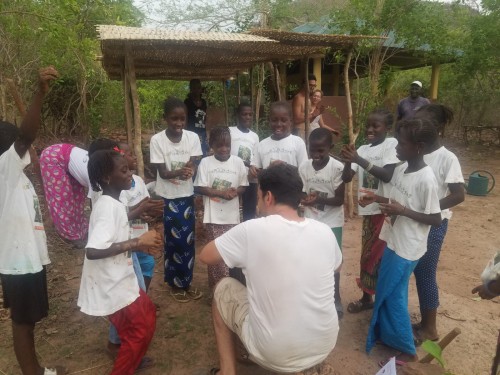 Fede, Director of JGIS playing the drums for the Roots and Shoots kids

On the fourth day I had the privilege of being involved in the JGI Roots and Shoots program. This is a world-wide program teaching children about the environment and how to care for it, and here in Dindéfélo it is run for the local children by a team coordinated by French volunteer, Corentin Even. Often 50-60 children come to participate in the weekly workshops. It is an amazing thing to see children, who often help their mothers to cook, gather wood and water, clean and look after younger children at home; be able to come to the JGI station to have fun and learn. This day Corentin (locally known as Coco) was teaching the children about how to make compost and how to plant seeds such as tomatoes, eggplants and courgettes. These classes are important not only for fun, but for the children to be able to take those skills home and incorporate them in their own family lives. 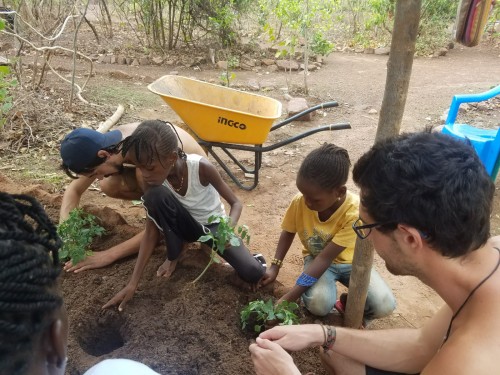 Whilst I have been in Dindefelo, I have also made the most of swimming in the beautiful Dindefelo waterfall, which is about a 20-minute walk away. The water from this literally runs right through the chimpanzee forest near the village and is crucial for the chimpanzees and local people as a water source. Near the village, the thin river is often used for washing clothing. This waterfall is also an attraction for adventurous national and international tourists, who thus contribute to the sustainable development of the community by paying their fees to the Dindefelo Reserve and staying in the village. It is an amazing way for more people to see the beauty of the forest and its species and understand the importance of the conservation work that JGIS is doing here. The more people who know and care about the plight of the West African Chimpanzees, the more that can be done to help. JGIS is always requiring more support in order to be able to achieve more for this critically endangered species, the people and their environment. Among other things, JGIS contributes to the building of water wells, schools, and different infrastructure and services that are crucial to the local community. 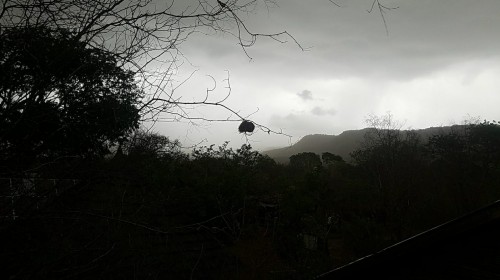 The first rain of the year arriving - you could hear it coming!

There are many factors that cause Senegal to be such a challenging environment. Climate change is one of these, causing the temperature to rise, the rains to come later in the year, more spontaneous fires to break out, and less food to be present. This year the rains, which normally arrive in May, did not arrive until the second week of June which leads to the threat of the wells and rivers drying up, for both the people and the wildlife.

Even in New Zealand there are small things you can do at home to make a difference. Supporting local conservation organisations like JGI New Zealand, educating oneself on responsible consumerism such as buying FSC approved products like toilet paper, recycling correctly or even planting a few more trees in your backyard! 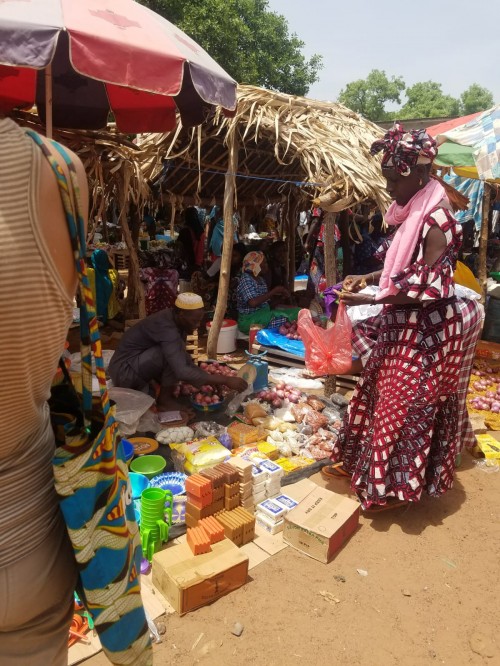 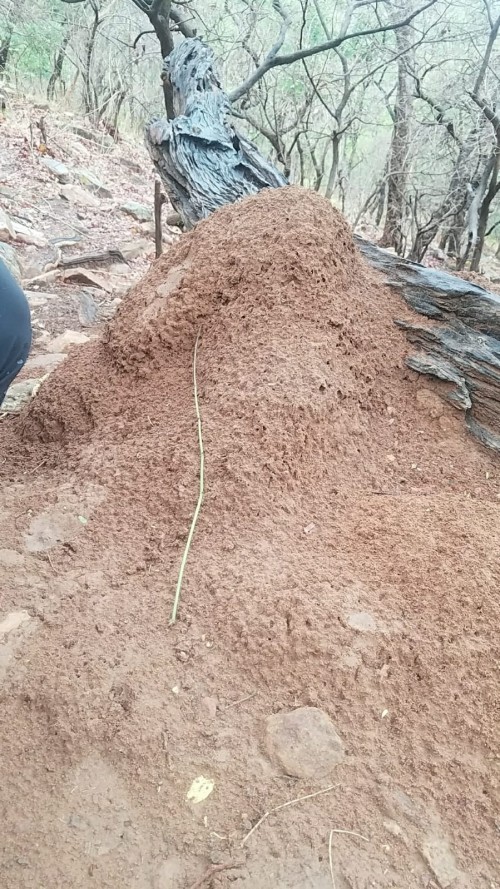 On a personal note, it is amazing what the people are able to cope with very little. As I write this, it is 44 degrees Celsius in the shade - and yet they must conserve the water that is available here. Many live in small huts with blocks made of mud and cow manure, and with thatched roofs. 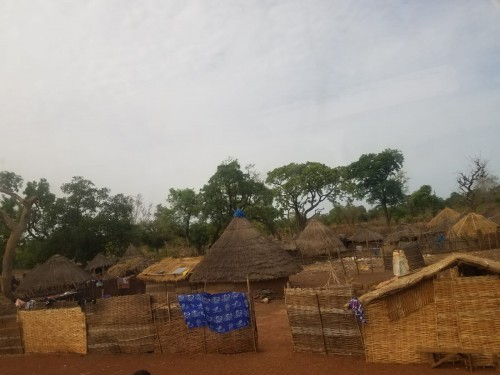 A village in rural West Africa

Food variety is limited and mainly consists of rice or couscous and a sauce, for almost every meal, with the occasional piece of meat from the local market. Yet the people here are still so kind and generous, even to a silly “toubab” (white person) who doesn’t speak the language, such as myself! I am very fortunate that the 5 research field assistants here, students, volunteers and JGI staff from Spain and France, all speak some English, which has made my transition to living here much easier. 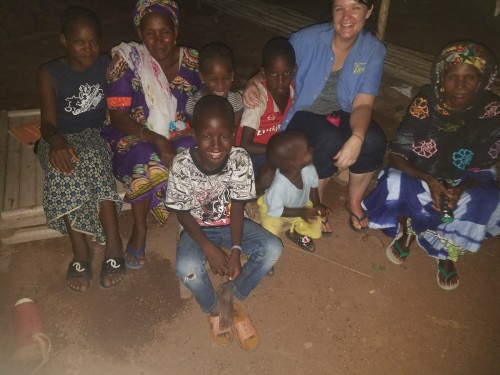 Mel with her local family

This has been a life changing experience for me and made me much more aware of the impact we are having on our planet and its very real life consequences.

Thank you for taking the time to learn a little more about my conservation trip and thanks again to the Wellington Zoo Conservation Fund and JGI New Zealand, for allowing this partnership with myself and JGIS to become a reality.