Kia Ora everyone, my name is Meg and I’m a Ranger at Wellington Zoo. Earlier this month I was lucky enough to spend a week down in the Catlins helping out a student from the University of Otago, Max, with his Masters project. 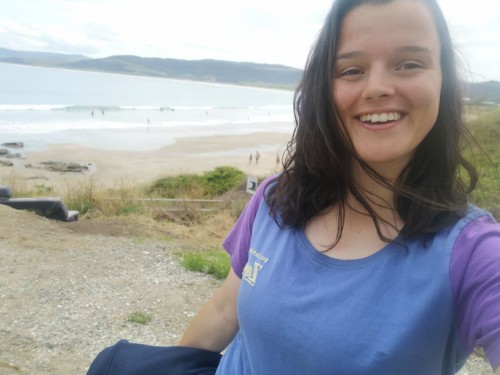 Max is examining the effect of tourism on a resident population of the nationally endangered Hector’s dolphins who use Porpoise Bay as a site for feeding, resting and socialising as well as raising calves. Hector’s dolphins prefer to stick around shallower waters such as coastal areas as they are good spots to feed in, and sticking closer to the shore gives them a bit more protection from their predators. However, in shallower waters they are closer to us. 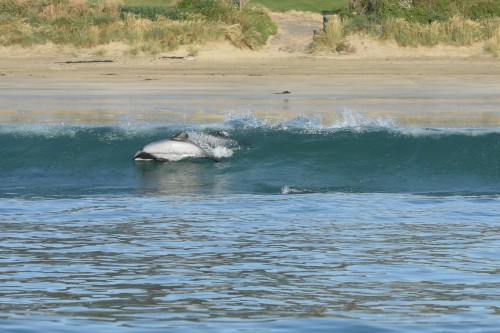 Since the last time this project was completed in 2003, Porpoise Bay has experienced a notable increase in tourism. The research is being funded by the NZ Whale and Dolphin Trust and DOC, who both have a keen interest in monitoring the risks to this taonga species and mitigating them where possible. Before any policies, laws or guidelines can be changed, a lot of supporting evidence is needed – so hopefully Max’s results will be able to help when reviewing marine mammal tourism guidelines in the future. In the past, studies of this kind have resulted in Marine Mammal Sanctuaries being established which have been very successful in the conservation of Hector’s dolphins. 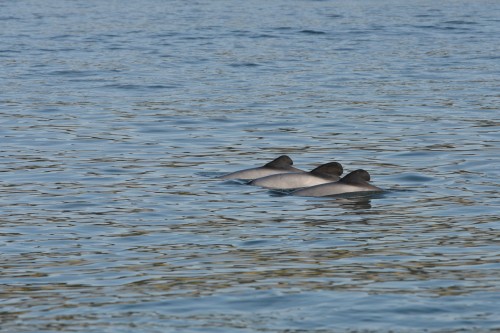 Hector’s dolphins are one of the rarest and smallest species of dolphin in the world, and are the only species endemic to New Zealand. There are a couple of different populations but probably the best known is the Māui dolphin, found off the east coast of the North Island. They’re also pretty easy to spot due to their unique round dorsal fin and black markings. The best way I’ve heard the dorsal fin described is as a Mickey Mouse ear shape which is pretty accurate as you’ll see from the photos.

Lots of swimmers and surfers can be seen from the Headland

Porpoise Bay is slowly gaining more popularity, possibly due to the fact quite often the resident dolphins are known to approach swimmers to check them out. Current guidelines advise you not to enter the water within 50 metres of dolphins, however of course many tourists are so excited by the prospect of swimming with dolphins they pay the guidelines no heed and approach them anyway. 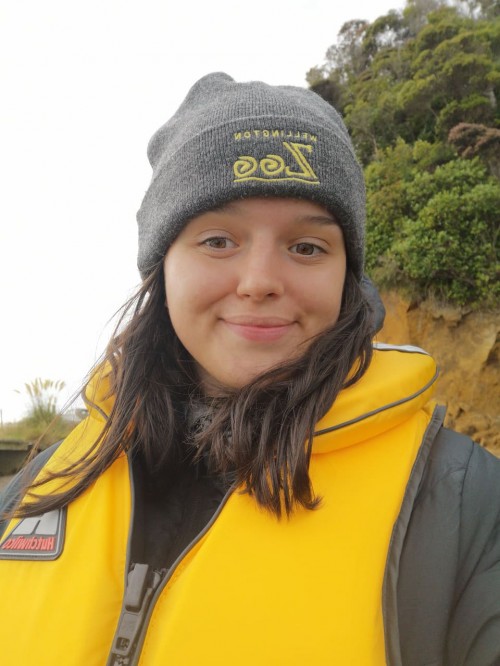 Meighan at Waikawa read to leave to do photo IDs

The fieldwork consisted both of Photo IDing the dolphins from a boat and observing interactions between swimmers and dolphins from the headland. Generally through the week we’d get up bright and early to see if the conditions were good, and then we’d head out onto the boat from Waikawa. Once we spotted a group of dolphins, we’d drive the little 4metre boat within a safe enough distance and switch the boat engine off. Max was then able to photograph the dolphins’ dorsal fins when they surfaced. Particular individuals can be identified by markings on their dorsal fins, and if you are able to identify lots of different individuals you can eventually estimate the population in that area. It can be a little bit tricky to take clear enough photos of their fins and is very dependent on their movements and the waves, but sometimes they were feeling pretty curious and approached a little closer. I was lucky enough to see a couple of calves swimming closely alongside their mums. 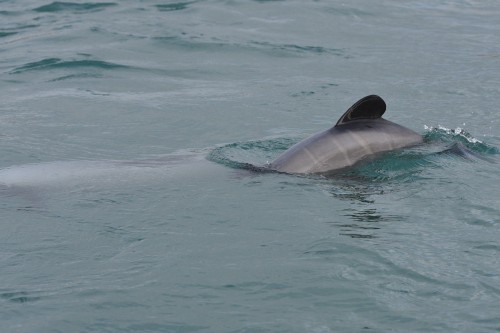 This is the type of photos we were taking to Identify individuals. As you can see on the left hand of the dorsal fin there are slight marks unique to this particular dolphin.

Hector’s dolphins only have calves every 2 to 3 years so their population can grow quite slowly – another factor making them quite vulnerable to anthropogenic disturbance. Seeing calves is always a huge positive particularly in a small population like the one that lives off the Catlins. They were relatively young calves and still had the foetal folds from being tucked up inside their mum on their back. 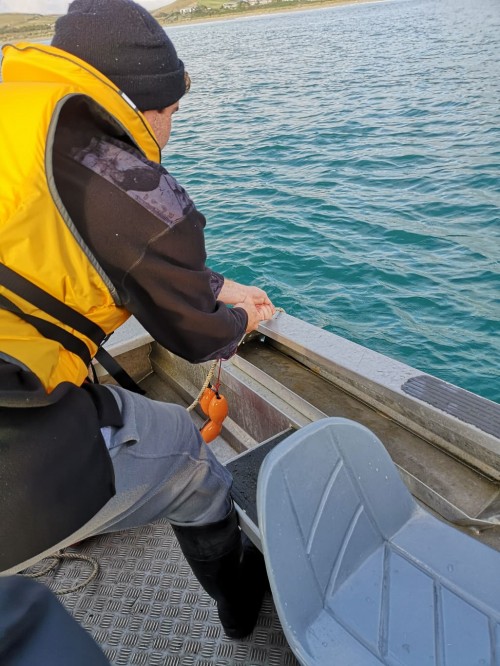 We also retrieved a couple of T-Pods from two positions in the bay which were recording the acoustic activity of the dolphins – just like other species, Hector’s dolphins rely on echolocation to find food and navigate. I’ve analysed acoustic data from T-Pods before at university but hadn’t ever seen a T-POD. After we had spent a little bit of time taking photos of different groups on the boat, we went up to the headland of Porpoise Bay to track swimmers and dolphins positions using a piece of equipment called a theodolite. Using this, we were able to track interactions between groups of dolphins and swimmers and that data will then be used to see if the position of swimmers influences the position of dolphins – we were tracking the position of surfers, bodyboarders, unaided swimmers as well as boats and other marine mammals. The theodolite is able to measure horizontal and vertical angles, and from that you are able to convert the angles into coordinates and place the interactions of human activity and dolphins on a map. 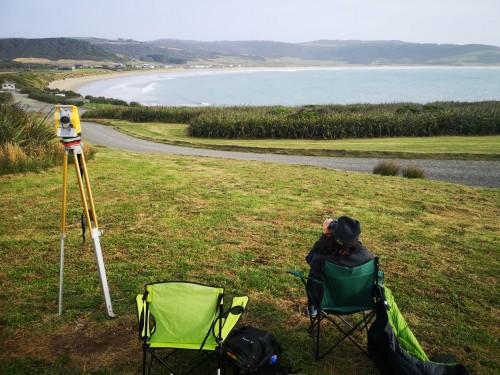 This shows our set up on the headland, the theodolite and Meg with binoculars

As you can see from the photo, our set-up on the headland was understandably very intriguing for a lot of visitors and locals and it was great to be able to engage with them, explain what we were up to, point out where the dolphins were in the bay and also communicate the risks to Hector’s dolphins. Many of the people we interacted with were potential users of the bay so hopefully they were more mindful after chatting to us. 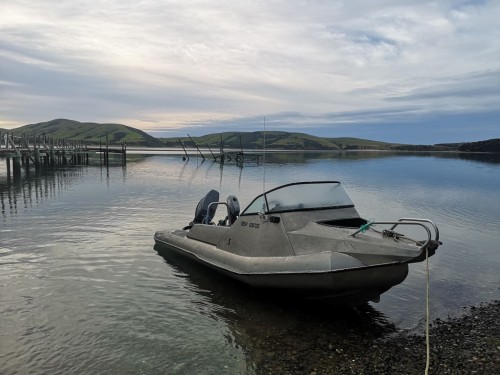 The boat before leaving Waikawa in the morning

Max still has a few months of data collection to do, so he’s not sure of the results yet - but it’s possible that the effect is less of an immediate impact and more of a long term detrimental effect to the dolphin’s biological fitness. Shallow areas are absolutely fundamental areas for these dolphins to rest and make sure they’re healthy. If the results show that the dolphins hang out in the bay for shorter periods of time when there are lots of tourists around and therefore spend less time resting and feeding in these productive areas, there could be a need to re-examine how interactions between tourists and dolphins are managed to make sure they are allowed peace from us. 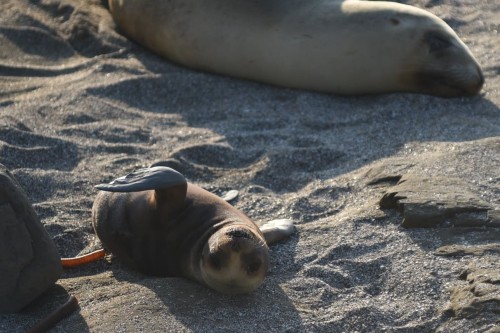 By spending a week helping Max, I was able to learn so much both about Hector’s dolphins and about the hard work going on behind the scenes to protect them. I hadn’t really considered the amount of fieldwork that is required to prove the need for legislation to protect any species before. Porpoise Bay and Curio Bay are a wildlife hotspot and I was so fortunate to be able to see 3 native Taonga species – NZ Sea lion (mum and pup!), Hoiho (yellow eyed penguins) and of course Hector’s dolphins. I’d definitely recommend a visit, but if you do please remember to give wildlife plenty space and let them approach you – it’s so much more special when they approach you themselves.

I’d like to thank Max, the NZ Whale and Dolphin Trust and the Department of Conservation so much for allowing me to join the project and help out with such an important project. I would also like to thank Wellington Zoo and the Conservation Fund for allowing me to spend a week down in the Catlin’s experiencing the hard mahi being put in to protect New Zealand’s wildlife and wild places.