You may have noticed a friendly new face in the African Savannah habitat at Wellington Zoo recently. Our newest visitor at the Zoo is a two and half year old female Eastern Bongo called Maisha and she is the first ever Bongo in New Zealand! 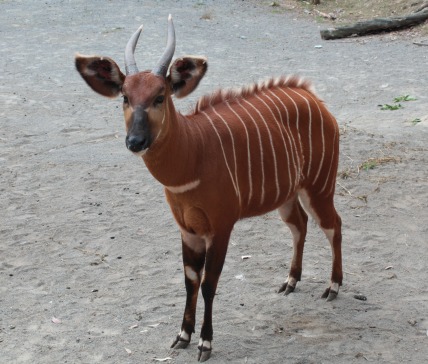 With a similar appearance to our resident Nyala, this critically endangered Bongo is slightly larger and you’ll notice two large horns on her head.

Maisha arrived here late last year after travelling all the way from Singapore Zoo. She will remain in our care for another six months before we send her to her new home in Australia at Taronga Western Plains Zoo. Australian zoos can only import antelope after they have spent a year in New Zealand for quarantine.

Maisha will be an important part of the ZAA breeding programme, as there are currently only eight males and one female Bongo in Australia. This breeding programme is vital to the Australasian population of the Eastern Bongo, as they are listed as critically endangered by the IUCN. Good zoos work collaboratively to make conservation breeding programmes like this successful, and we’ve been working with Taronga Western Plains Zoo for a number of years to make this journey happen.

The Eastern Bongo is found throughout mountainous areas of Africa and like other antelope, the Bongo is a herbivorous mammal, meaning their diet consists of only plant matter. They also have a prehensile tongue, which means their tongue is like a hand. The Bongo can reach up above and with their tongue, grab fresh leaves off plants with no trouble.

See if you can tell Maisha apart from the Nyala in the African Savannah habitat next time you’re at the Zoo!

Amy Signs off from Free the Bears