Carnivore Team Leader, Maxine Jenkins has been in Colombia working with the Zoo's Conservation Partner, Proyecto Tití around some of their key initiatives for protecting the Cotton-Top Tamarin; research, restoration, education and community outreach. 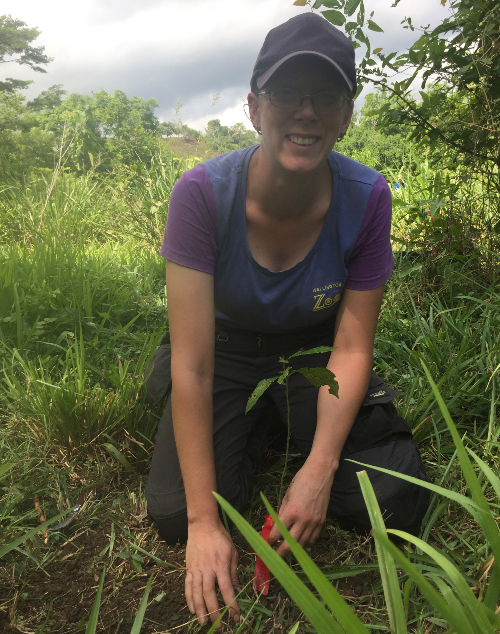 The second half of my adventures saw me travel 3 hours south of El Ceibal to the community of San Juan Nepomuceno.

We took an off-road jeep an hour into the forest to reach the settlement of New Mexico, where Proyecto Titi’s plant nursery is located. They currently have grown over 20,000 native plants this year, with the goal to reach 40,000. These plants will be used to form and restore forest corridors which will allow Cotton-Top Tamarins and many other species to move safely between the reserve known as Heaven and the National reserve of Los Colorados. 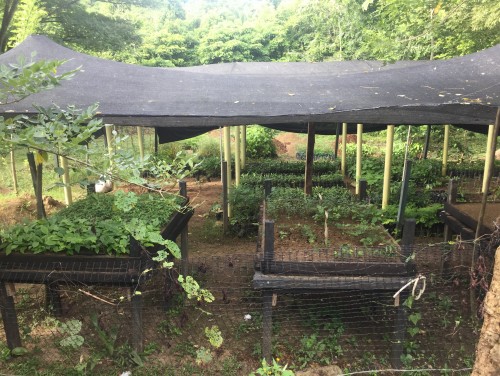 The nursery at New Mexico

I spent my first day helping to label and number hundreds of plants that will have their locations recorded as they are planted. Later in the week, I was able to assist in a planting day where we planted close to 400 plants that can grow to over 40 meters tall! The biggest hurdle for the planting was the temperatures soaring to over 35 degrees Celsius as well many of the holes being filled with biting ants (not to mention the risk of scorpions, venomous snakes and wasps). Despite this beingdifficult work, I’m very humbled that I was able to help restore the forest to this area, especially knowing that eventually, this corridor will be alive with thousands of species that previously called this land their home. Areas like this will allow Cotton-Top Tamarins to disperse naturally without risking going to the ground to find new habitats, keeping them safe from predators and humans. 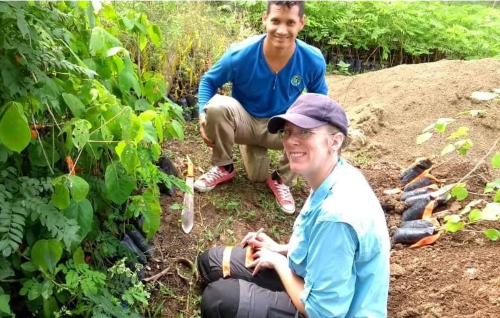 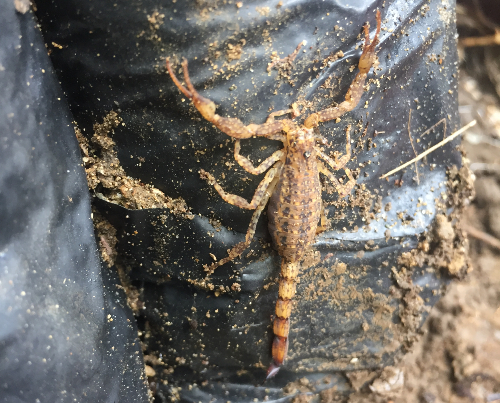 Scorpions are some of the creatures to be wary of when planting in the restoration area.

Los Colorados is a new area being studied by Proyecto Titi. This national reserve is known for the Red Howler Monkeys that are known locally as Mono Colorados. It’s very difficult to find groups of Cotton-Top Tamarins in this area as these groups do not have radio trackers. The goal here is to habituate the Cotton-Top Tamarins to being monitored until they can be caught and the transmitters attached.

We start out early in the morning and head to where a number of feeding tables are located in areas the Tamarins are known to cross through the forest. They are located high in the branches so we follow the tracks, bringing down the tables, putting out new banana slices and returning them to the treetops. Our guide clambers to the top of a tall tree to set a camera trap and as I’m waiting I hear tiny chirps surrounding us. A tiny face is looking out of a crack in a tree – poison dart frogs! It was such an amazing find. 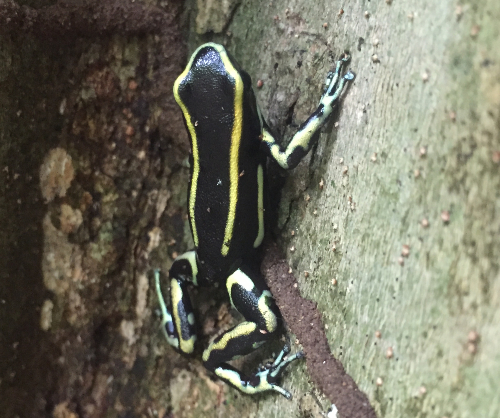 Continuing through the forest, our guide spots a prehensile-tailed Porcupine high in the trees. While we are busy admiring the Porcupine, crashes behind us reveal a family of Howler monkeys, including a female with a young baby riding on her back. She’s not keen to stick around but an older male lets us admire him for a while. I’m overloaded by seeing so many stunning species but I’m also brought down to earth by the illegal logging we stumble across. Staff had been through this area on Thursday and there had been no damage to the trees and now on a Monday three trees have been cut down with one left to be removed. Trees are used for a number of reasons in Colombia including firewood, housing, cooking and most popular – fencing for livestock. Because it’s so humid here, the posts rot quickly and need replacing frequently. The tree stumps are GPS tagged and the info passed on to the authorities. Proyecto Titi is remedying this by paying locals to collect plastic waste, which is recycled into plastic fence posts. They are being used to fence off land owned by Proyecto Titi but will eventually be offered to others. We finish off our day in the forest in a stunning river bed with Blue Morpho butterflies around us – these are some of the largest in the world. 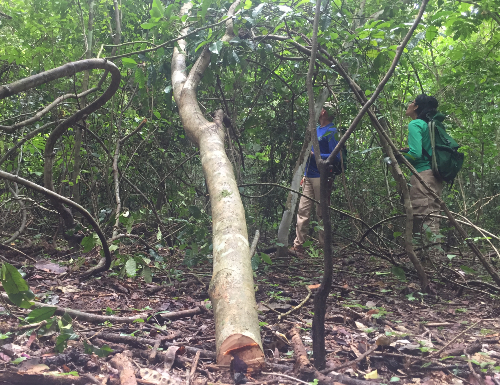 The last week of my stay was spent with Proyecto Titi's ‘Amiguau’ program. This is a program that encourages children to have dogs as pets instead of taking wild animals like Tamarins, Macaws and Tortoises from the forests. Like many developing countries, dogs are not seen as pets here and because they are not trained, they tend to be scared or aggressive. Proyecto Titi’s education team is being taught how to train dogs which they will then pass on to local children to allow them to train their dogs in basic behaviours and build closer bonds with them. Staff from Disney’s Animal Kingdom come twice per year to help train staff and I was able to see the program first hand, visiting local families and seeing the improvement in care for their dogs once they see that they can be more than just guard dogs or pests. 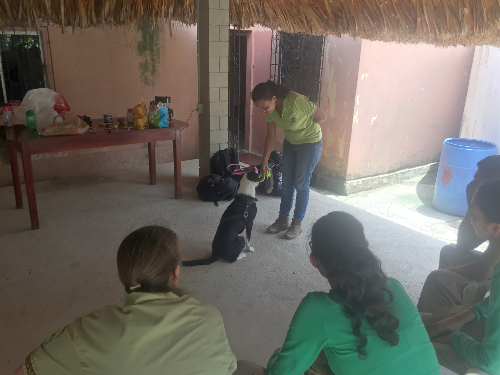 The Proyecto Tití Education team working on their dog training

Colombia has been an amazing experience, filled with friendly welcoming people, stunning scenery and species animal lovers can normally only dream of. It’s a country I hope to return to one day and revisit the areas I was able to see on this trip. Proyecto Titi’s mix of Research, Restoration, Education and Community Initiatives is making inroads into preserving both Cotton-Top Tamarins and their habitats and I’m grateful to the Wellington Zoo Conservation Fund for supporting me on this trip.