With support from the Wellington Zoo Conservation Fund, Herbivore Keeper and Tasmanian Devil enthusiast Jeff Lewis is in Tasmania, Australia for just over 2 weeks to work with Save the Tasmanian Devil Program. Jeff has recently assisted the team in the field on Maria Island for their quarterly survey of Tasmanian Devils and now he's at Cressy Wildlife Centre to get an insight into the ambassador programme. 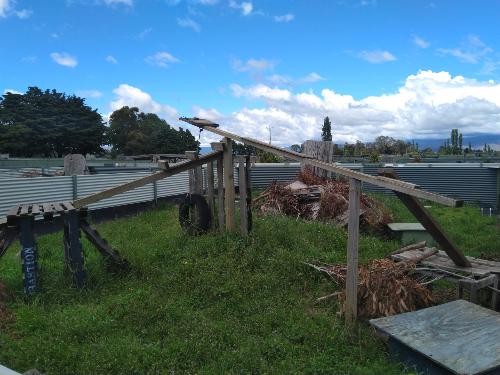 As I help with the Devil Program this week, I will visit a couple of different facilities that they run. This morning I met with the ambassador Devil team at their Launceston office. A few of us drove out to Cressy Wildlife Centre where they have about 50 Devils in their care. The Devils that are in good health and have valuable genetics will be released into the wild across Tasmania wherever supplementation of populations is needed. 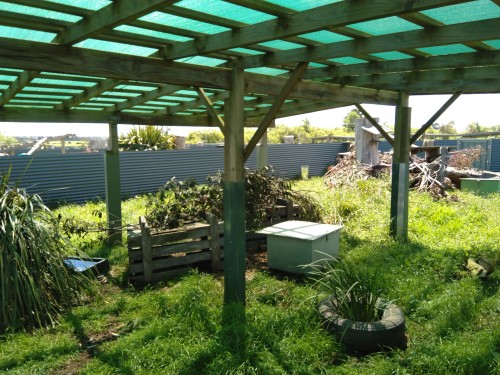 We spent a couple of hours in the morning cleaning Devil habitats, checking Devils, rearranging browse and providing fresh water. Some of the Devils were more reactive to us in their space, especially the mothers with imps (young). We then located and collected fresh browse on a trailer and drove it back to Cressy to freshen up some of the habitats and to provide enrichment and shelters. After this, we fed out Wallaby and Chicken carcasses to the individuals that were on a feed day. Some of the feeds were left in habitats for the shyer Devils to find in their own time, but three of the Devils were more confident with people and came out to be hand fed at the sound of the vehicle coming. To finish the day, we set traps with a bait of Chicken in four of the habitats to hopefully catch three mothers and their imps overnight. We plan to handle them the next day for full health checks, microchipping and biopsies of the imps with a Vet. 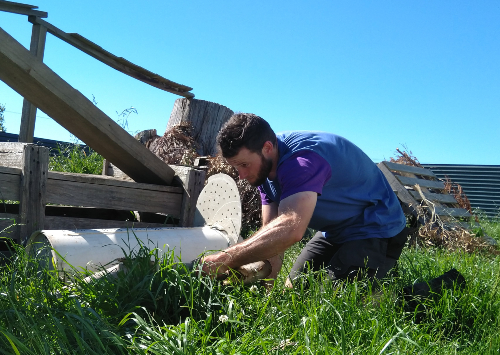 Jeff setting up a Devil trap in the habitats 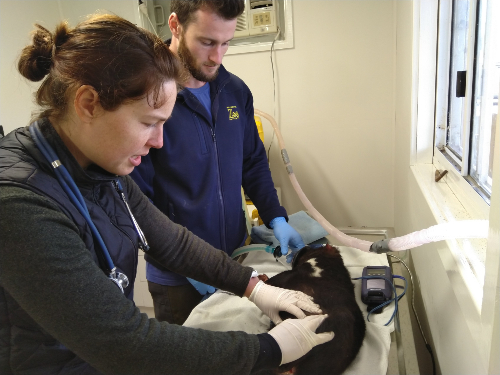 Jeff assisting the health checks of the Devils

A Vet from Hobart arrived and we set up for general anesthetics on two of the adult females and did a pre-export health check and collected blood samples as they are heading to a zoo on mainland Australia. The next general anesthetic we did was a wound check of a juvenile female that had to have a toe amputated recently, after sustaining a compound fracture. The wound was cleaned and rebandaged. Devils are pretty tough and hopefully, she'll heal quickly. 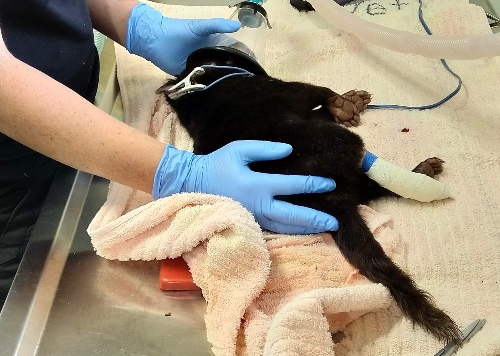 Mint the Devil gets a bandage change

After the anesthetics, three litters of four imps were consciously weighed, microchipped for identification and skin biopsied for genetic analysis. I was fortunate to do this for five of the twelve imps. The imps were all given herb and condiment themed names today, such as Mustard, Thyme and Rosemary. After the procedures, we released each of the litters of imps back in with their mothers and they promptly bounded back to the shelter of their dens. 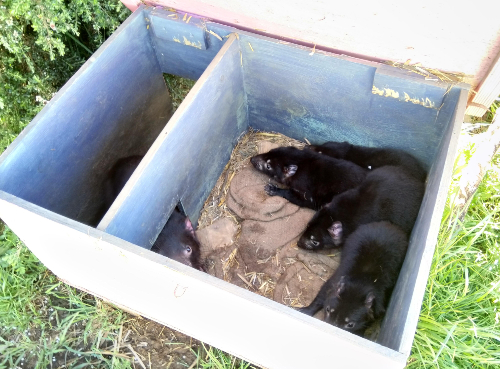 A few days later I met with Dom at Launceston and we drove out to Freycinet National Park, a couple of hours away on the east coast. The Save the Tasmanian Devil Program has a large, free-ranging habitat within the park on the peninsula. A storm had been forecast to hit the east coast and high winds and rain arrived as we came over the ranges. 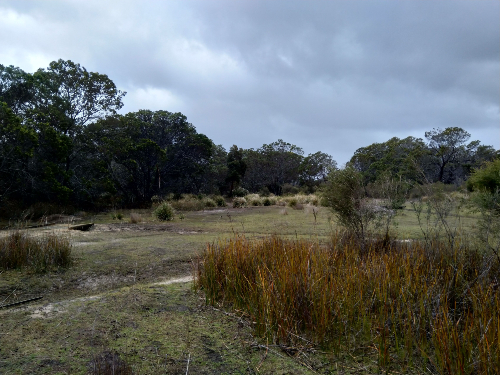 When we arrived, I drove a small 4WD around the perimeter and completed a containment check. We then drove into the park, checking den sites and cleaning old scat and food up around five feeding stations. There were motion sensor camera traps at the feeding stations too and we replaced the rechargeable batteries at these, ensuring after that the cameras were secure, out of reach of curious Devils and positioned to get the desired footage. Feeds of Chicken and Possum carcasses were laid out at each location. Apparently, Copperheads are especially common in the park and could be active in the warmth of the bracken undergrowth. A few Bennett's Wallabies were hopping around too. At our first camera trap site, I saw a Devil run out of the scrub at my approach and away down a dry creek bed. This was a young female called Possum who had shown fidelity to the den site she was born in, breeding in and inhabiting that area too. 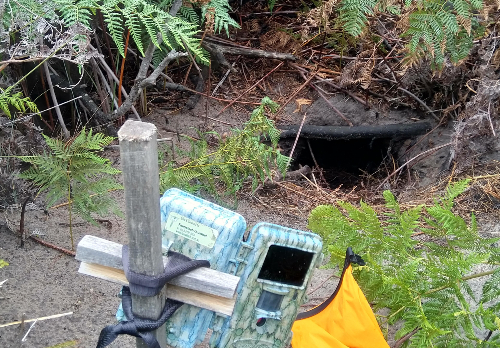 Devils, particularly mothers, will often have multiple dens, one of which they'll use more frequently. They will establish new dens in suitable areas that have often been pre-dug by Wombats. At the last camera/den, Dom kept an eye out while I serviced the camera as this den belonged to May-bella, a particularly protective mother. Devils are not strictly territorial or solitary and will overlap in home ranges so that they can social feed, tugging on a scavenged carcass together to rip it apart making it easier to consume. But mothers, for good reason, can become very territorial of their dens.

On the way out we reloaded a solar-powered auto-feeding chute, that is triggered to open and release meat by Devil presence. We then locked up and left early with enough time to cut a trailer load of browse for the Devils at Cressy. 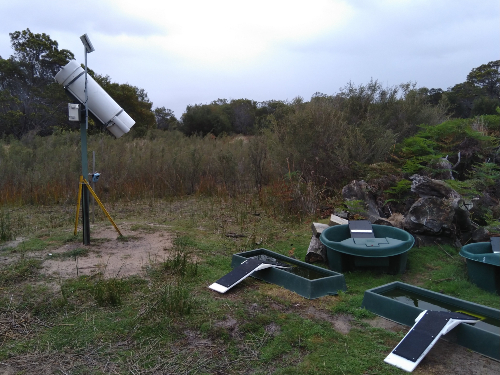 We returned to Cressy Wildlife Centre and for my last day, we checked Devils, cleaned habitats and changed their water as usual, and then labeled and set aside traps to be used tomorrow to capture five Devils who have been selected for wild release.

Diet preparation followed and we fed out Wallaby to the Devils. After this, Mint (the Devil who had broken her toe last week and had it amputated) required checking and rebandaging of her wound. She was caught up in a hessian sack by another member who restrained her while I rebandaged. She was only young and very little but still very wriggly and strong. I quickly and gently cut the old bandage off and flushed her wound with saline. The wound was still actively bleeding but granulating tissue was starting to appear around the edges and the tissue outside of the wound didn't appear red and infected. Hopefully, it will continue to heal well and Mint's paw will need daily rebandaging. 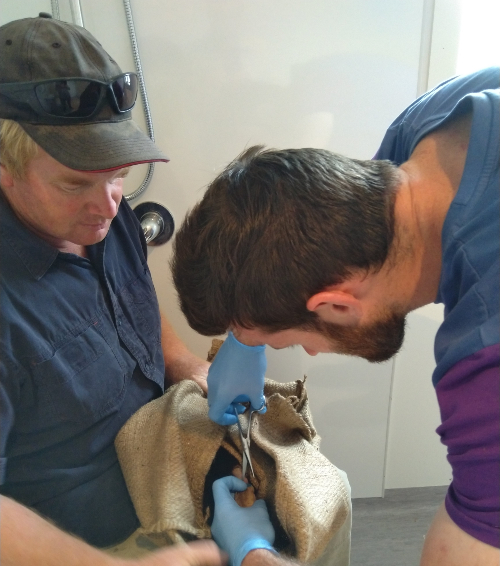 Jeff assists the team with another wound check on Mint, the Devil

At the end of the day, one of the field officers arrived with a Devil she had picked up from the airport. This Devil, Tallulah, had arrived from a wildlife park in South Australia as one that had also been selected for release. She will be temporarily held at Cressy over the heat of summer and when it cools down coming into autumn next year, she will be released on Maria Island to give her the best chance of success, and excitingly will hopefully have four young in her pouch to add to the population and gene pool. We set up a habitat with plenty of cover, water, and food earlier and Tallulah was introduced to this new temporary home on arrival.

Today was the end of my time with the Save the Tasmanian Devil Program sadly, but I am excited to bring back new skills, knowledge, and experience to Wellington Zoo. It was an incredible opportunity working with this program and I met some wonderful people and animals. The work that they do for Devils and the ecosystem is inspiring and has a significant impact. This experience would not have been possible without Wellington Zoo and the Conservation Fund and I would like to thank them for supporting me to travel here and for their contributions to wildlife conservation.

Through the Zoo’s Conservation Fund, Wellington Zoo enables myself and others to live our ethos of "Me tiaki, kia ora!", to be guardians for the environment, at home and abroad.