With support from the Wellington Zoo Conservation Fund, Herbivore Keeper and Tasmanian Devil enthusiast Jeff Lewis is in Tasmania, Australia for just over 2 weeks to work with Save the Tasmanian Devil Program. While Jeff is over in Tasmania, he will be assisting the team in the field on Maria Island for their quarterly survey of Tasmanian Devils and then he'll head north to get an insight into the ambassador programme.

My name is Jeff and I am one of the Herbivore Keepers at Wellington Zoo. I am currently on Maria Island in Tasmania working with one of our conservation partners, Save the Tasmanian Devil Program to help save the endangered, Tasmanian Devil. 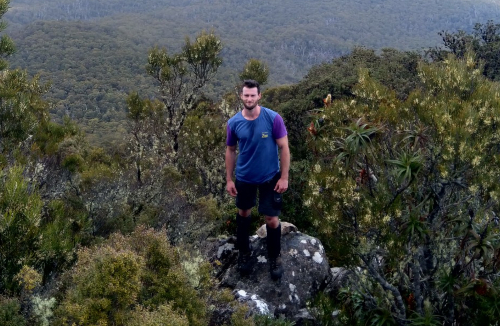 Maria Island was initially farmed, mined for limestone and siltstone, and was the site of two small prisons in the early days of settlement but is now an important reserve for a range of native wildlife, in particular for Tasmanian Devils. The population here is confirmed as being Devil Facial Tumour Disease free and is used for replenishing and establishing healthy populations on mainland Tasmania when required. Devil Facial Tumour Disease is a contagious cancer which is the main threat to Devils and has caused their rapid decline. The team at Save the Tasmanian Devil Program (STDP) is working tirelessly to mitigate this threat through population management and research into the cancer, and to also reduce other causes of decline such as deaths on roads. The Zoo has been a long-term partner of STDP and supports this programme through the Wellington Zoo Conservation Fund. This fund has also given me this brilliant opportunity to contribute my Devil husbandry skills and ecological knowledge to the conservation of this unique species.

When I first arrived I was picked up in Hobart by Bill and Phil who are Wildlife Biologists with STDP. Bill dropped Phil and I at Triabunna to catch the short ferry out to Maria Island. After arriving on the island at Darlington and settling into the staff house, Phil and I prepared bait for the Devils. Our aim over the coming week was to change the batteries, data cards, and baits at thirty motion sensor camera traps, and check the previous data cards' footage to help us obtain presence/absence during Devils' nocturnal activity and their population density. This is part of a quarterly survey. Tasmanian Parks and Wildlife and STDP also monitor species' presence and densities in relation to the introduction of Devils here as Devils are opportunistic hunters, as well as scavengers. The bait is strong smelling and aims to lure Devils to the cameras to get a better idea of their presence. The bait consisted of oats, peanut butter, fish, fish oil and small pieces of dried meat. 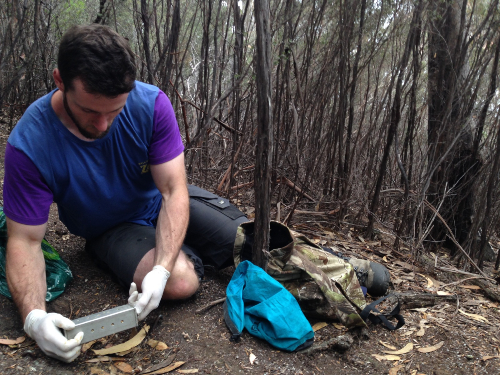 We checked and changed 8 cameras and baits on the first day, Phil was responsible for the camera and myself for the bait. Some cameras were as far as 3km from the trail and we had to move through dense vegetation and up steep, rocky ridges and hills. We had to be careful of our footing too in case of Tiger Snakes, Copperheads and White-lipped Snakes. So far most of the cameras have been showing Devils but also Bandicoots, Rufus Wallabies, Echidnas and Possums. Other numerous wildlife here include Shearwaters, Little Blue Penguins, Wombats, Cape Barren Geese, Eastern Grey Kangaroos, Bennett's Wallabies, Yellow-tailed Black Cockatoos, Wedge-tailed Eagles, White-bellied Sea Eagles, Black Currawongs, Oscillated Skinks and Forty-spotted Pardalotes. On our way to the second camera of day two, Phil came across a Tiger Snake basking on a rock, it quickly slid into a crevice once it noticed us and unfortunately I missed my opportunity for a photo. 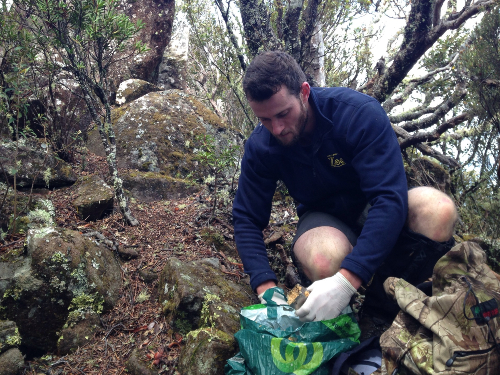 We made our way by vehicle to the start of the Mt Maria track (the island's highest point). We climbed to the approximately 740 metre summit and nearing the top the track became a scree slope of large boulders. The summit offered panoramic views of the whole island. We then serviced and changed the camera and bait 100 metres down the north-east face. Some of the crevices between the boulders were potential suitable Devil dens. Plenty of Devil scat has been seen around the cameras so far. We then headed back down and serviced 2 more cameras. The first one was about a kilometre off track through dense, steep bush and the other about 400 metres of the same. On the way to the first camera, I spotted my first Tiger snake. It was just a sleepy, little one that also went for the shelter of a rock when it realised we were there. After finishing the Mt Maria cameras, we checked 2 more, one on another peak called Bishop and Clerk, and another inland from the reservoir down a fossil-laiden river bed. 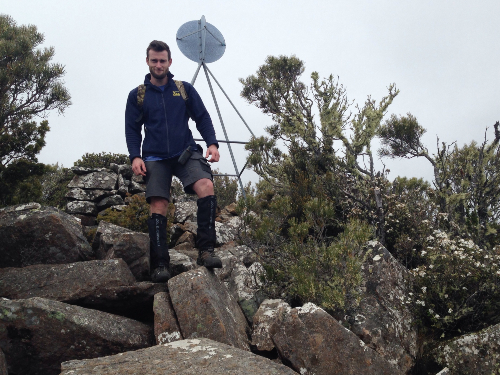 We got to camp just before 1pm and helped prepare seven Devil traps. Yellow-tailed Black Cockatoos, Kookaburras and Sea Eagles were active throughout the afternoon. The traps were large plastic tubes with a bait of wallaby or possum hanging in the end that when pulled would trigger the closing and locking of the door. A carcass was hung from a nearby tree to help lure the Devils in. Seven traps were set and these will be left out overnight and checked in the morning. We heard from a film crew who were on the island that they had observed a mother Devil and four imps (young) exploring outside their den in the quarry.

From her markings and number of young, the mother could be identified as Andy, a female who had been released on Maria early in the project in the hope that she would breed and bring new genetics to the population. The fact that the footage had confirmed that she had so far successfully raised four imps was excellent news, exactly the result that was intended. The imps were filmed investigating the camera hide, climbing trees, vocalising and playing. Based on collaborative research at Sydney University, the Devil team have decided for now to only introduce females to the Maria Island population as males are often hit and miss with breeding, but females have a significantly higher chance of successful breeding and contributing to genetic diversity. 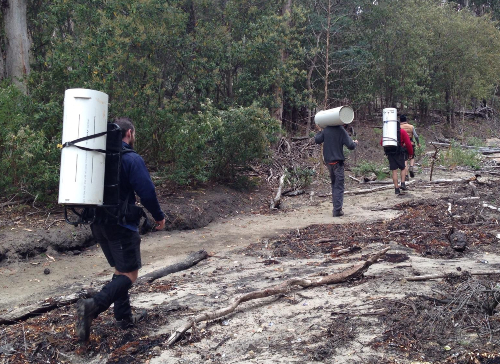 Overnight we heard a Devil and a couple of potoroos rummaging around in our camp, but unfortunately when we checked the traps in the morning we were out of luck again and there was just the usual amount of Devil sign. It's possible that the Devils on this more remote side of the island are more wary of humans and new things as they are less exposed to them. 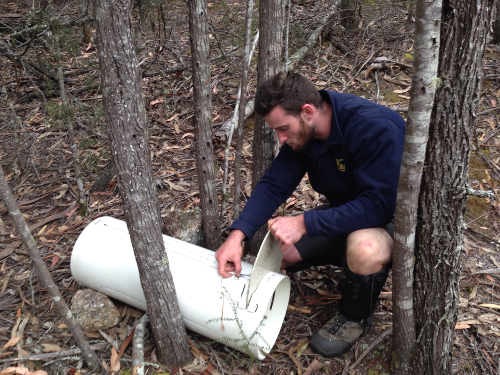 Throughout the remainder of the morning as we waited for the Parks and Wildlife boat to arrive to take us back to the west coast, we checked out another possible den site and set up a microchip scanner station on the hill above camp. The scanner is solar powered other the panel positioned over a pen with a small entry for Devils to come through. The scanner is above the entrance and reads the chip of the marked Devil as it enters, attracted to the wallaby carcass and fish oil laid out for it inside. If it is a Devil that has not been seen and chipped before, two motion sensor camera traps take images of it so it can be identified later on future trapping trips. Knowing the number of unchipped Devils also enables a more accurate error for the population estimate to be determined when the population size and density is calculated based on the more frequently observed Devils in the more accessible areas of the island.

Wellington Zoo's Conservation Fund has helped to finance the set up of these important scanner stations and the purchase of tablets to easily upload scanner data, camera footage and trap statuses while out in the field. This has been extremely valuable in increasing efficiency in monitoring Devil populations. 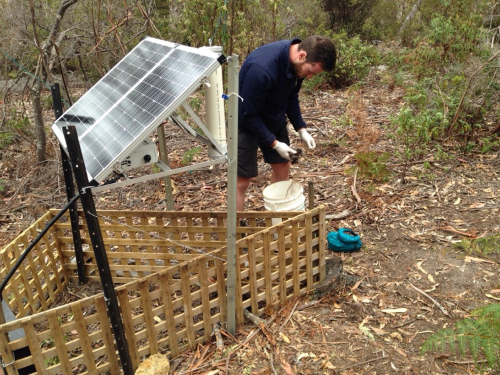 We set off around the east and north coasts back to Darlington on a boat and as we passed the contorted limestone, siltstone and granite cliffs, stained by a variety of colours of lichen, a pod of Humpback Whales cruised past. The Tasman coast is a highway for them. We arrived back at the house and packed our gear to catch the ferry back to Triabunna later that afternoon. 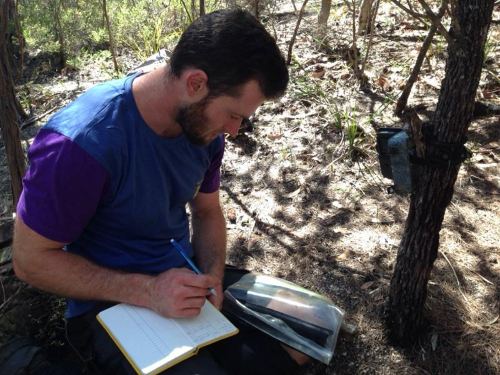 Although we didn't catch any Devils this time, there was plenty of signs and footage of them this week suggesting that they are thriving on the island. The current population estimate is approximately 80 individuals.

This week on Maria Island with the Save the Tasmanian Devil Program team was an incredible experience and I am fortunate to have seen so much of the island and wildlife and to have worked with such dedicated and positive conservationists. I would like to thank Wellington Zoo and the Conservation Fund for making this experience possible and supporting an extremely worthwhile cause.

On Tuesday I head up north to visit Devils in human care and gain an insight into the ambassador program. Read my other blog on the Zoo website in a couple of weeks for updates on this leg of my trip. 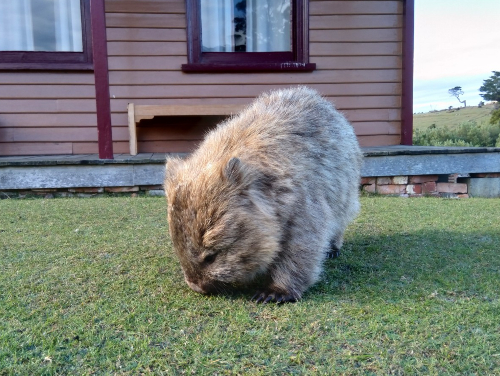 Jeff spotted many wildlife, including a Wombat! 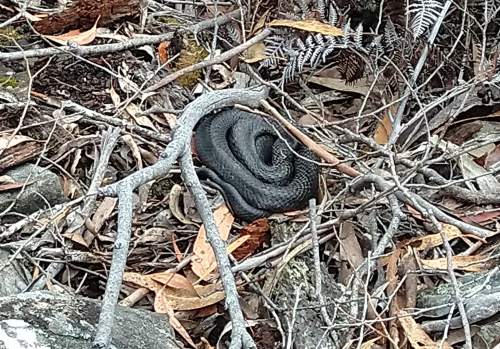