Our team at The Nest Te Kōhanga has been caring for Phoebe, a Tuatara who has been getting special care since January - after she received head wounds - probably from other Tuatara in her habitat. 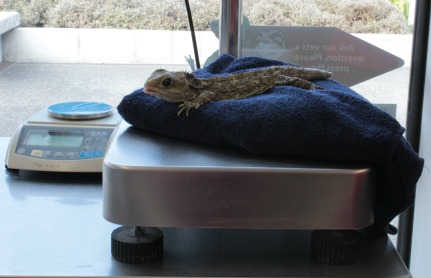 Phoebe usually lives at Victoria University, but our Vet Team were able to care for her here at the Zoo by helping to clean up her wounds, give her a course of antibiotics and monitor her recovery.

Phoebe has responded really well to the treatment – and the good news is, she’s now settling back in at home! Her caregiver Sue arrived on Monday 4 April to take her home to Victoria University where she will continue to recover in their care.

Phoebe has a pretty interesting history - she was originally destined to reside in a museum after she was found in the wild in an emaciated state and wasn’t expected to survive. However, against all odds, she bounced back with a fighting spirit. While Phoebe regained most of her strength, the difficulty she had in eating (due to her teeth being mostly worn down) meant that she would not be able to fend for herself in the wild, so she now lives at Victoria University in a group of animals kept for public display and advocacy.

Phoebe came to Victoria University from the wild in 1990 and it’s hard to determine her exact age due to her unknown history in the wild. Tuatara grow until they’re at least 60 years old, and some have been known to live past one hundred.

The Nest Te Kōhanga and Victoria University have worked closely together with Tuatara for a number of years with the incubation of Tuatara eggs. In 2007, 55 juveniles were released onto Long Island in the Marlborough Sounds as part of a breeding programme with the Department of Conservation.

The Tuatara has survived for almost 220 million years; therefore it has earned the title as a “living fossil”.

Learn more about our Tuatara.