I’m Esta Wilson-Burke, one of the Primate Keepers at Wellington Zoo and I'm currently working with the wonderful team of the Jane Goodall Institute Spain on the West African Chimpanzee Conservation Program based here in Kedougou, Senegal. 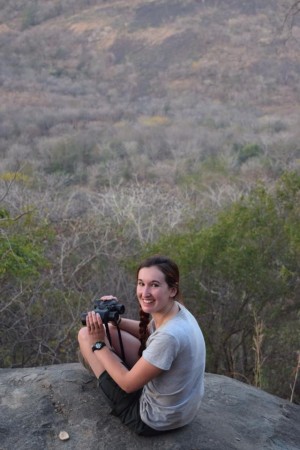 Chimpanzees are an endangered species and Senegal is home to some of the last Western Chimpanzees of the population. At the last census (2003) the population numbers were recorded between 200 – 400 individuals. One of the biggest concerns for the Chimpanzees here is loss of habitat which is primarily caused by low agricultural productivity, slash and burn methods, an increase in human population in the area, and the unsustainable extraction of wood and fruits. This deforestation is also already affecting rain patterns, which millions of Africans depend upon in the region.

One of the main achievements of the program here in Kedougou, was the creation of the Reserve Naturelle Communautaire de Dindefelo (13.000 Ha), which is the first community reserve with Chimpanzee conservation as its main goal. This was created in 2010 and the reserve encompasses three field sites that the team from JGI Spain and local volunteers monitor.

During my time here I will be working predominantly with the research team, who study the behaviour, biology and ecology of the Chimpanzees. I will spend time at each of the 3 field sites, Dindefelo, Segou, and Nandoumary, to see the challenges and differences between each area. I have just finished my first week with the team in Nandoumary which was fantastic and will be heading off to join the team at Segou next week.

Nandoumary is a village that sits in the hills above Dindefelo plateau and also sits on the border of Senegal and Guinea. Last week I started the climb up there along with the research team, Liliana and Justin and some of the agroforestry team, Teresa and Pancor who all work in Nandoumary. The first part of the walk is more of a climb, up rough, rocky, steep terrain until you reach the plateau. The climb is worth it for the beautiful view of Dindefelo below! Once we reached the village I was taken to meet my family who were hosting me for the week. I had one host dad, three host mums and an array of host brothers and sisters! The people in Nandoumary are all incredibly kind and have a real sense of community life. They all really take care of one another, and their guests; I felt warmly welcomed into the village. My family were also very understanding of the language barrier – Pular is the language spoken by most people here in Kedougou, otherwise French, and I couldn’t speak either! Luckily my family found this extremely amusing and my younger brothers and sisters enjoyed teaching me some good phrases in Pular and letting me know when my pronunciation was way off! So after being settled in with my new family I said goodbye to the rest of the team as they went to their respective families and had an early night before my first day out in the field the next morning.

A typical day out in the field in Nandoumary meant a nice, early start (6.30am) then a morning of surveying and collecting data out in the forest. The main objective for the research team in Nandoumary currently, is the ecological survey, identification and habituation of the Chimp group. The amount of ecological data and the detail recorded is extensive. We record indirect signs of the Chimps such as nests, faeces, food scraps, footprints, broken branches and direct signs of the Chimps, calls and vocalisations, visuals of them, behaviour, reactions to researchers, etc. We also record if we see other animals, wild or domestic, signs of human activity in the reserve (e.g. trees cut down), the weather etc. The technology to record this is really fantastic, the team uses a device called Runbo for the data collection. This information is collected through a program called Cyber Tracker, then we can view it on another software called SMART (Spatial Monitoring and Reporting Tool). It is amazing to see the map of where we have travelled through the day and all the markers indicating nests, faeces, etc. This is done at all 3 field sites and creates a huge database of knowledge. The team can search for queries in the system like how many new nests have been made in the last week or what was the main food source of the Chimps that month. This is hugely beneficial in monitoring patterns and behaviours within the Chimp communities here.

Find out more about the Jane Goodall Institute.

Things get a little wild after hours with Zoo Twilights