Hi everyone, it’s Amy here again. For those of you who missed my last blog, thanks to support from Wellington Zoo’s Conservation Fund, I’m currently in Laos helping Free the Bears, one of the Zoo’s conservation partners. 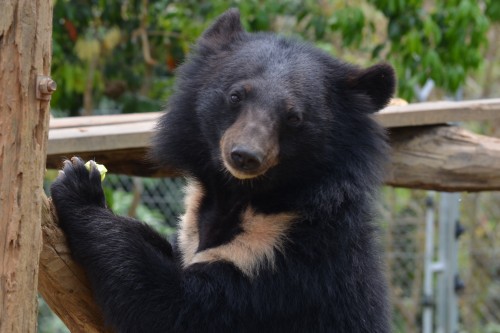 I was previously at Free the Bears’ Tat Kuang Si Bear Rescue Centre for two weeks and for the remainder of my time in Laos I’ll be based at Luang Prabang Wildlife Sanctuary. Free the Bears started building Luang Prabang Wildlife Sanctuary in 2017 in response to a spate of bear rescues and to relieve overcrowding of bears at Tat Kuang Si Bear Rescue Centre. 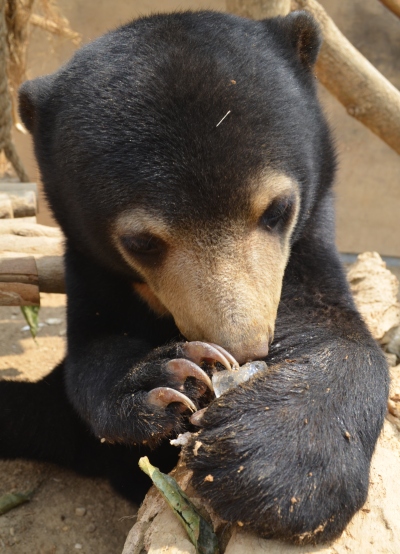 Currently, there are 23 Moon bears at Luang Prabang Wildlife Sanctuary and Free the Bears’ only Sun bear in their Laos sanctuaries, an eight-month-old cub named Mary. Mary was rescued around Christmas time last year after she was spotted in a cage sitting in the back of a car in Laos. It’s likely Mary would have been taken from her mum after her mum had been killed and was potentially going to become part of the exotic pet trade or be sold to a bear bile farm. Weighing in at only 4.4kgs when she was first rescued, Mary is now a very healthy 21kgs! 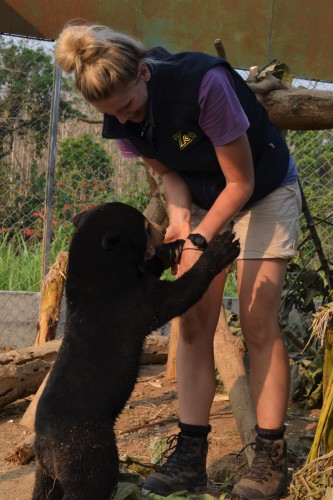 Keepers won't always be able to go in with Mary as she grows bigger and stronger, but as Mary adjusts to her new environment it's important she becomes familiar with and learns to trust her Keepers

In addition to the bears at Luang Prabang Wildlife Sanctuary, Free the Bears rescue and care for an array of other wildlife species that have also fallen victim to the illegal wildlife trade. At the Sanctuary there are currently three Impressed Tortoises, three Red Pandas, a Crested Serpent Eagle, an Alexandrine Parakeet, two Leopard Cats, an Asiatic Golden Cat, a Common Palm Civet, a Masked Palm Civet, a Pygmy Slow Loris, and 27 Macaques. 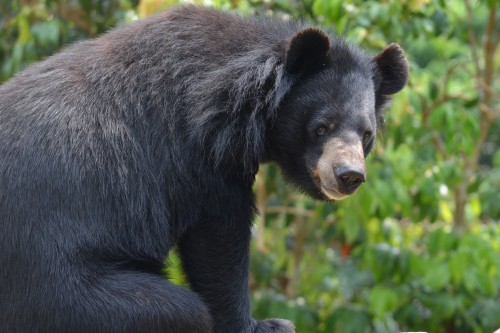 Moon Bear at the sanctuary

Not only are Free the Bears building bear houses as fast as they can to accommodate the increasing number of rescue bears, but they’re caring for numerous other wildlife because there simply isn’t anywhere else for these animals to go in northern Laos. 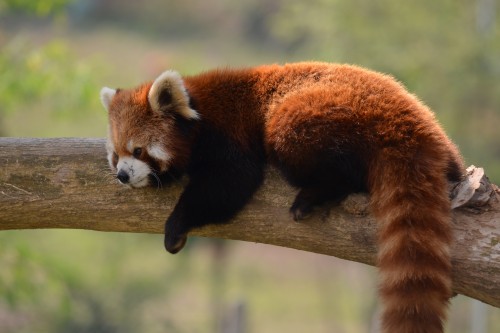 One of the Red Pandas at the Sanctuary

At the Sanctuary a brand-new vet hospital has just been built. On March 8th I was fortunate enough to go to the official opening of it. With the population of animals in the care of Free the Bears likely to increase beyond those animals mentioned above, the vet hospital will provide a haven for so many animals living at the Sanctuary to receive treatment rapidly onsite. After following the vet hospital’s progression from Wellington on Free the Bears’ Facebook page, I was very grateful to be at the opening and celebrate its almost completion with Free the Bears’ staff and the wider community. The opening started with monks from Luang Prabang coming to bless the vet hospital during a traditional ceremony and was followed by lots of food! 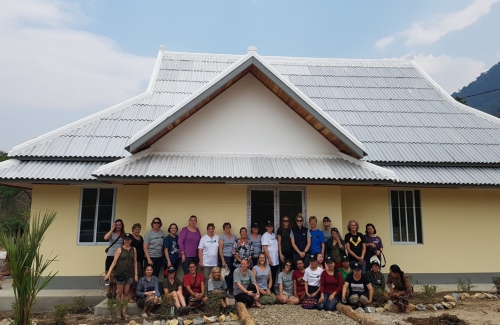 This past week while I’ve been at the Sanctuary, I’ve primarily been working with the Bear Keepers, helping them with daily husbandry tasks including feeding the bears and cleaning. We’ve also been busy making enrichment for all the animals to keep them mentally and physically stimulated. Today some of the enrichment Mary the Sun bear received included more trees and browse for her to climb (and destroy!), new toys for her to play with, honey trails around her habitat, and kongs (rubber pet toys) filled with some of Mary’s diet to encourage Mary to use her claws and tongue to get the food out (just like she would if she were in the wild). Enrichment is so important for rescue animals like Mary as it builds their confidence, encourages the bears to engage with their environment, and elicits natural behaviours that they would have often been deprived of prior to their rescue. 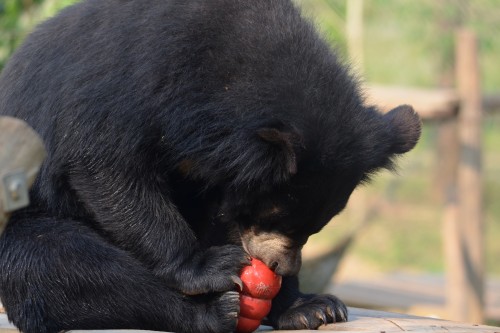 While I’ve been here, I’ve also been working alongside Maddie (Free the Bears’ Technical Advisor for animal husbandry in Laos) and some of the Primate Keepers to train a group of 12 Pigtail Macaques to all recall into an adjoining habitat to the one they’re currently in. This will then allow a group of Stump-tailed Macaques to rotate through to the habitat that the Pigtail Macaques were in. Again, rotating habitats like this can be very enriching and stimulating for those animals. 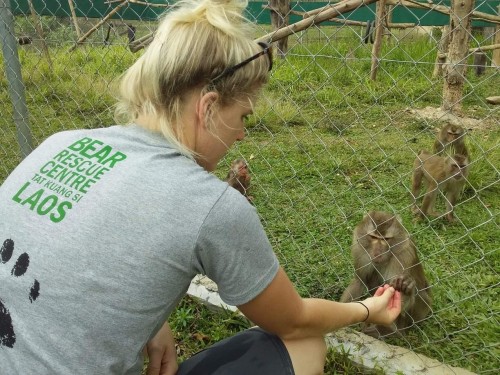 The macaques receiving some ice block enrichment from Amy

Next week we also plan to start some recall training with a group of six Moon bears that need to be trained to recall into a separate area of their habitat, to allow the Keepers to enter the main habitat without the bears being there. With all of the training, there are lots of treats involved for the animals to ensure it’s a positive and rewarding experience for them. I think the animals are definitely enjoying all the bananas they’re getting!

I’ll leave it there for now. In the next week or so I’ll be writing my final blog as my time here in Laos wraps up. After months of anticipating coming to Free the Bears, I can’t believe my trip will soon be coming to an end! 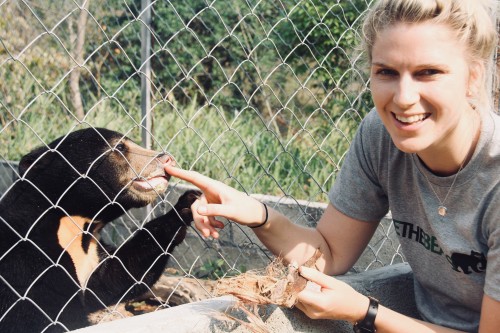 Amy with Mary the Sun Bear