A Tuatara with an amputated tail was recently released back to its home at Zealandia after treatment and recovery at The Nest Te Kōhanga, Wellington Zoo’s native wildlife and animal hospital. 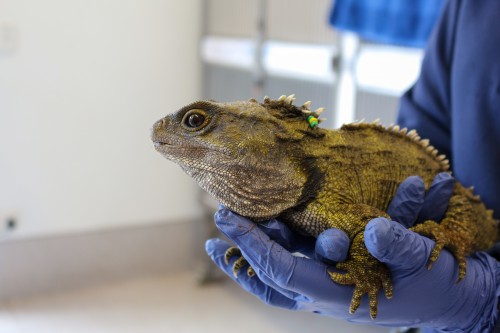 The Tuatara with a member of the Zoo Vet team

Wellington Zoo's Senior Veterinarian, Baukje Lenting said, “The male Tuatara had a severely injured and infected tail which we had to amputate. However, with treatment, he has completely healed and is able to be returned back to Zealandia.”

The Tuatara has been at The Nest Te Kōhanga since January and after initial treatment and recovery, was housed over winter to ready it for release.

Dr Danielle Shanahan, Director Centre for People and Nature at Zealandia said, “We are so grateful for the care from the veterinary staff at The Nest Te Kōhanga. Now that the weather is warmer and spring will provide more food sources, we are delighted to welcome this Tuatara back to Zealandia.”

“It’s an example of the value of the strong relationship that exists between ourselves and Wellington Zoo. Their expertise in caring for injured wildlife is invaluable,” Danielle says.

Zealandia was the first site to establish a wild population of Tuatara on the mainland. Tuatara were released into the sanctuary from Takapourewa (Stephens Island) over two main releases in 2005 (70 animals) and 2007 (130 animals), gifted by their kaitiaki Ngati Koata.  Tuatara have spread throughout the sanctuary, including right up to the fenceline.

As part of the Zoo's ongoing commitment to working together for Wellington’s wildlife, the Zoo formalised their partnership with Zealandia with the signing of a Memorandum of Understanding (MoU) between the two organisations back in August.

The Zoo will continue to treat native wildlife patients from Zealandia at The Nest Te Kōhanga and will also offer support for veterinary health checks and wildlife disease screenings on-site at Zealandia. Additionally, we will both look at identifying possibilities for joint research projects, funding opportunities and further professional advice and support.

Lanky the Pelican passes away