The entire South Wellington Intermediate School (SWIS) has jumped on board to join Wellington Zoo’s award-winning Bush Builders programme, with over 300 students taking part in November. 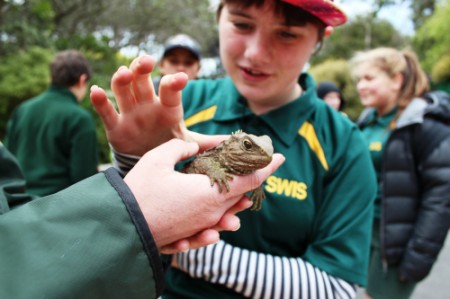 “Bush Builders is a community conservation project that aims to connect local children with local wildlife, and empowers them to take positive action in their own schools and communities,” said Wellington Zoo Learning Manager Lynn Allan.

The programme involves three phases: a launch at Wellington Zoo, followed by biological surveying and a student-driven action at school.

“We’re thrilled to welcome SWIS to Bush Builders. The entire school is taking part, and they’re Wellington Zoo’s closest neighbouring school, so it’s fantastic to have them involved.”

SWIS students also have the honour of being the the first Bush Builders group to explore Meet the Locals He Tuku Aroha – Wellington Zoo’s brand new walk-through precinct and love story to New Zealand’s flora and fauna.

“Meet the Locals He Tuku Aroha is the perfect space for Bush Builders, and SWIS celebrated their Zoo launch in the new precinct,” said Lynn. “The native bush area has been designed to encourage hands-on nature exploration, and 4,000 native plants have been planted in the site to attract our neighbouring native wildlife.”

“Their focus was on ecosystems, so we introduced them to the animals that play a critical role in the New Zealand ecosystem – local geckos and bees that are important pollinators, worms that play a vital role as decomposers, and Wētā that are an important food source for native wildlife like birds, reptiles, and bats.”

Since Bush Builders began in 2007, thousands of Wellington students have contributed towards the project’s goal of increasing the city’s biodiversity – one garden, birdhouse, Wētā hotel or lizard lair at a time. The programme was awarded a Wellington Conservation award for education and advocacy by the Department of Conservation (DoC).