Sean, one of the Zoo’s two Sun Bears, was rescued from outside a shop in Cambodia 20 years ago today, on 22 February 1997. 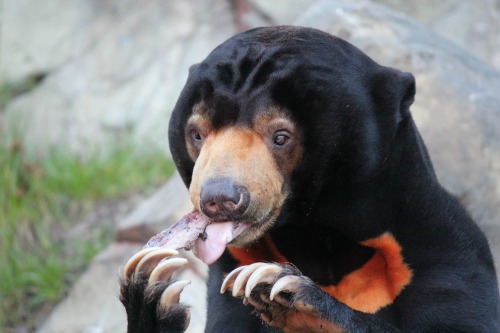 An Australian businessman found Sean chained outside a shop in Phnom Penh and rescued him on the back of his motorbike. After keeping him for a short while at his house he worked with Free the Bears to find a suitable home for Sean’s long-term care.

Free the Bears and the Cambodian Department of Forests and Wildlife sent Sean and two rescued female bears to Perth Zoo in 1998 to establish a regional conservation breeding programme for Sun Bears. Sean came to Wellington Zoo in 2004 to breed with our female bear Chomel.

Sean was one of the earliest bear rescues for Free the Bears in Cambodia. Their Founder, Mary Hutton, worked with the Australasian zoo association to find good homes for those first few bears until Free the Bears could find a long-term solution to the need for a safe sanctuary for bears rescued from the illegal wildlife trade.

In the 20 years since Sean was rescued, Free the Bears have saved over 900 bears across Asia, including almost 200 in Cambodia alone.

Sean has thrived here at the Zoo. He came here as part of the conservation breeding programme for Sun Bears and he was paired with our female Sun Bear Chomel. Their pairing was successful and Chomel gave birth to Sasa in 2006. At that time, Wellington Zoo was the only Zoo in Australasia that had successfully bred Sun Bears.

In 2012 we opened a purpose-built habitat for Sean and Sasa, which they love! They are the only bears in New Zealand, and our Sun Bears are very special to the people of Wellington.

Since Sean has arrived at the Zoo, we have supported Free the Bears as a conservation partner. Strong relationships are key for conservation success and we have been supporting them through the Wellington Zoo Conservation Fund for many years. We have also sent a number of our Zoo staff to their sanctuaries in Cambodia, Laos and Vietnam to assist with animal care, learning, marketing and visitor experience.

In the past we have hosted staff from Free the Bears’ Cambodia sanctuary and in March this year, two Free the Bears staff members from Laos will be at the Zoo to learn from our Learning Experience and Animal Care teams.

Sun Bears are classified as vulnerable by the International Union for Conservation of Nature (IUCN) due to extensive habitat loss in Southeast Asia and their use in traditional medicines. We are so lucky to have Sean at the Zoo, to be an ambassador for his wild cousins. Sean is helping our visitors learn about the threats to wild bears, in particular deforestation – and inspiring our community to take action by choosing FSC certified wood and paper products. 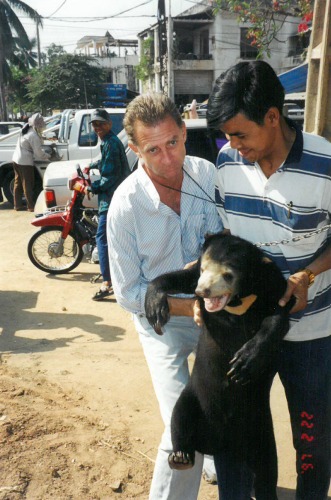 Sean as a cub in Cambodia

Nationally vulnerable Kororā released back to the wild