Twenty Nyala, an African antelope species, have arrived at Wellington Zoo to form the core for the Australasian breeding programme for the species. 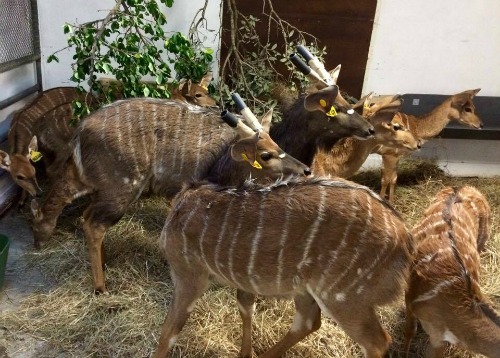 The Nyala have come from a private breeding facility in South Africa and will complete MPI quarantine here at the Zoo before they move to the African Savannah habitat. Eventually, a number of them will be sent to other zoos in New Zealand and Australia to form different breeding herds. The regional breeding programme is managed by the Zoo and Aquarium Association Australasia (ZAA) to ensure a wide genetic variation for Nyala in human care.

We are working with other ZAA animal welfare accredited zoos in the region to ensure the Nyala will be able to contribute to the breeding programme. While Nyala aren’t endangered, antelope species around the world are declining. Nyala will help play an important advocacy role for other endangered antelope species like the Eastern Bongo, so that people can learn more about these beautiful animals and raise awareness for the threats they face in the wild.

Antelope species are an increasing conservation concern, with one-third of the world’s 87 species now listed as threatened. The main threat faced by antelope is declining habitats due to agriculture and climate change. Nyala have disappeared from extensive areas of their former range due to habitat loss from agriculture, but a large percentage of the population live in national parks and game reserves in southern Africa.

The Nyala are due to complete quarantine by the end of September and visitors will be able to see the new antelope in the African Savannah at the Zoo.