An adult Kororā Little Blue Penguin has been successfully released back to the wild after receiving expert care from veterinary staff at The Nest Te Kōhanga, the Zoo’s native wildlife and animal hospital. 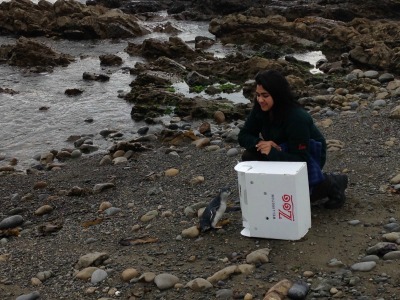 Originally found at Moa Point, the Kororā was brought to us by a member of the community and it appeared to be halfway through a moult and underweight. Through quality food and fluids, our vet team were able to build up the bird’s body condition so it was able to complete its moult and be ready to be released back to the wild.

Moulting is one of the most energy consuming periods in a bird’s year. Once a year, Kororā Little Blue Penguins will moult to replace any worn out feathers. During this time the penguin is unable to swim and hunt for food because they lose their waterproofing. The penguin needs to ensure they have plenty of body fat stores to last them for the moulting period, which can last around 2-3 weeks.

Since being cared for at The Nest Te Kōhanga, the Kororā has completed its moult, regained its waterproofing and is now in a really good condition. As part of the treatment and care for the Kororā, it was fed salmon daily and given plenty of time in our salt-water pool to regain feather waterproofing.

The Kororā was released back to Moa Point where it was found, as birds like the Little Blue Penguin are known to return to the same spots over time.

The community can help protect our Kororā by keeping their cats inside at night and keeping your dog on a lead when you’re out and about along the coast.