After arriving in our care on March 9, our team at The Nest Te Kōhanga has successfully released an adult Kororā Little Blue Penguin along the coastline of Moa Point in Wellington on Friday May 6. 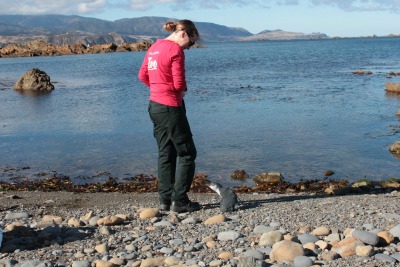 The penguin was found by a member of the community in a nearby carpark during a moult in an emaciated state. Moulting is one of the most energy consuming periods in a bird’s year. It is very likely that the penguin would not have survived in the wild to complete its moult, as it didn’t have enough stores at the beginning of this period.

Since being cared for at The Nest Te Kōhanga, the penguin has completed its moult, regained its waterproofing and is now in a really good condition. Weighing in at just 850g when the penguin arrived, it’s now a healthy 1.3kg. The Vet Team fed the penguin 130-150g of cut salmon twice a day and given fluids for dehydration. Some wild animals are also more susceptible to stress and infections when being treated at the hospital, so the penguin was given a preventative treatment for aspergillosis, a fungal infection that can sometimes develop in wild animals

Kororā Little Blue Penguins are most active early in the day when they go out to sea to hunt and later in the evening when they come ashore to nest, making them particularly vulnerable to dogs and cats.

Here at the Zoo we are helping to protect Kororā Little Blue Penguins, who have been rated as nationally vulnerable by the Department of Conservation.

We work together with the Department of Conservation, Forest and Bird’s Places for Penguins, and many community groups who live around the Wellington coastline.

Recently, we sent submissions to Wellington City Council regarding our Animal Bylaws and Dog Policy, to voice our concern around the potential risks to wildlife and natural habitats in Wellington. Allowing dogs off leashes around penguin populated beaches can have a devastating effect on our local penguin population. The aim is to find a balance between minimising the potential risks to wildlife with the recreational and exercise needs of dogs and their owners.

What you can do

You can help protect our native penguins by keeping your cat inside at night and keeping your dog on a lead when you’re out and about along the coast. Not only will you help to protect Kororā Little Blue Penguins, but also other native wildlife that are in range state.

Once a year, Kororā Little Blue Penguins will moult to replace any worn out feathers. During this time the penguin is unable to swim and hunt for food because they lose their waterproofing. The penguin needs to ensure they have plenty of body fat stores to last them for the moulting period, which can last around 2-3 weeks.