Kia ora everyone, my name is Kat and I am a Bird & Herbivore Keeper here at Wellington Zoo. Thanks to Wellington Zoo's Conservation Grant I was lucky enough to be given an opportunity to head down south to Milford Sound to assist the Tawaki Project team with some of their field conservation work with Tawaki/Fiordland Crested Penguin.

The Tawaki Project involves a team of scientists, researchers, and volunteers undergoing a long-term study of the marine ecology, breeding biology, and population dynamics of the world's least-known, most enigmatic penguin species. The knowledge and research gained from this project can allow us to start to implement conservation measures that aid in preserving such an iconic and endangered species and monitor population trends.

The Tawaki Team for the 2021 breeding season in Milford Sound

Tawaki or Fiordland Crested Penguins, are part of a family of seven species of erected penguins, five of which are found around mainland New Zealand and the subantarctic islands. Tawaki inhabit the southwestern coastlines of the South Island as well as Stewart, Codfish, and Solander Island. They are endemic to New Zealand and population numbers are estimated to be around 2,500 - 3,000 breeding pairs, making them one of the rarest penguin species.

Tawaki are unlike other penguin species that nest in large colonies - they are extremely secretive and prefer to nest in caves, rock crevices, or under tree logs in very hard to reach and remote parts of the South Island. This means that Tawaki can be very challenging to research and monitor, hence why so little is known about them in the wild.

Adult Tawaki with chick on the nest - Photo by Ursula Ellenberg

How do you monitor such an elusive penguin?

While I was assisting the Tawaki Project with their work, I was able to get an insight into this sort of remote field conservation work and what it involves. I was able to join an awesome team of people and head out to one of the colonies in Harrison Cove. Southern Discoveries were more than happy to help us by providing transport and even lunch on the boat!

The Harrison Cove colony is one of the most studied in Milford Sound as it is easily accessible from the Discovery Centre by kayak (around 15 mins paddling). Once we were dropped off by the Southern Discovery tour boat, the team and I packed our things into the kayaks (ensuring everything we needed was in dry bags) and paddled out to the colony with the beautiful Milford mountain range as our backdrop. 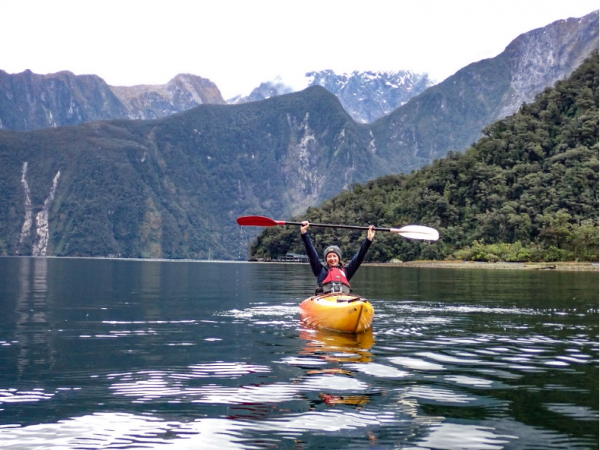 Kat kayaking out to the penguin colony in Harrison Cove

Once we arrived, we set up our camp so that we could head straight back after our work at the colony as occasionally this involves working quite late into the night (sometimes finishing at 4am). When camp was set, we headed out with plenty of snack and supplies, ready for a long night of penguin work.

The main focus of my time with the Tawaki Project was to assist them in retrieving adult penguins when then came ashore at night and remove their GPS logger devices (which had been deployed several days prior). I also assisted in the tagging and weighing of chicks/adults from the colony. The GPS devices are places on the female birds as during the breeding season, males tend to stay with chicks to guard them while females go out for days at a time to forage. Placing the GPS devices on the females allows more information from the data loggers to be collected. The purpose of the data loggers is to collect vital information about location, dive depth, and speed in order to find out more about where the penguins are foraging around the Fiords.

To retrieve an adult penguin, it is best to wait until they come ashore at night after spending the day foraging at sea. To do this involves a bit of a waiting game as they are incredibly shy and any sudden noise, light, or movement could have them running back into the sea, meaning the chance of catching them that night is gone. The adults come ashore between 8-10pm to feed their chicks, this is known as "penguin rush hour" and was our best chance to catch them. Some of the work at the penguin colony involved sitting and waiting just off from the colony and siting adult birds as they came ashore, checking to see if any of the individuals were carrying data loggers. If any were spotted, then we caught them and retrieved the data loggers before sending them on their way. 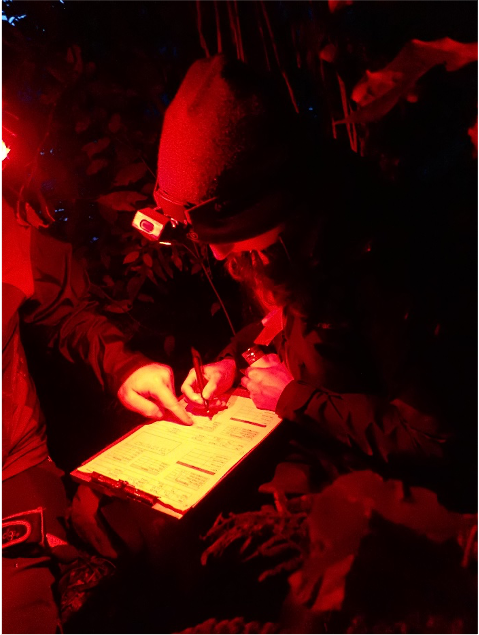 Kat and the team working at night using infrared torches

Once the data loggers were retrieved, it was time to head back to the DOC house to recharge after a night camping in the forest and prepare for our next trip to the Harrison colony for our nest monitoring work.

Our next visit to the colony a few days later saw some better weather with sunshine and clear skies (a rarity in Fiordland). This part of the work involved moving around the colony during the day which meant clambering over large boulders and fallen trees whilst ensuring we were quiet and didn't disturb the penguins still in their nests with chicks. Once a nest was located (they were numbered using cattle tags) we climbed through the cave on hands and knees to check if any chicks were residing in them.

If the nest has chicks, they were gently handled by the team and placed into specialist penguin bags to keep them calm whilst they were weighed, had their beaks and heads measured, and microchipped. The penguins are microchipped with PIT (passive integrator transponder) tags, which is a unique identity for each bird and is placed subcutaneously in the interscapular region. This microchip allows researchers to identify individuals and record data (such as chick growth) to monitor the success of breeding season. As well as this, the data recorded gives information on whether returning chicks choose to breed within these same locations and can give researcher and conservationists the opportunity to monitor population trends.

Between the team, we were able to tag several chicks and adult penguins throughout the day and into the night - making for a very successful monitoring session! This meant our work for the day/night was completed at 4am - but it was well worth all the hard work to get the results that we did!

Kat, Jeff, and Robin taking measurements and records from a Tawaki

My time with the Tawaki Project has been amazing and I cannot thank everyone enough for what I have learnt and seeing the passion that goes into helping such an iconic and charismatic species. I would like to thank the team from the Tawaki Project as well as a special thank you to Ursula for keeping my spirits up well into the night during our chick tagging.  I would also like to say a huge thank you to Wellington Zoo for their support in giving me the opportunity to help a project that I am so passionate about.

You can learn more about the Tawaki Project here - http://www.tawaki-project.org