With support from the Wellington Zoo Conservation Fund, Reptile Keeper, Kayla Aitken has just been to Maud Island where she was helping with the annual monitoring of the native New Zealand frogs there. 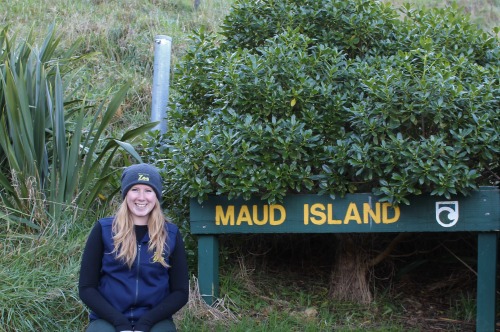 At Wellington Zoo I have the pleasure of working with five Maud Island Frogs, which are a threatened species considered to be nationally vulnerable. So the opportunity to go out to Maud Island and see where our frogs are from and learn more about them was a great opportunity.

Maud Island Frogs are one of only a few native New Zealand frogs and are evolutionarily distinct. Some very unique features about these frogs are that they don't have external eardrums; they don't swim or croak but sometimes make a yelping sound. Being terrestrial their offspring continues to develop in the egg capsule, and then they emerge as little froglets with tails. They are also very long lived with some on Maud Island being over 40 years old. The oldest known frog on the island is 43 years old. They can also climb which is amazing; they were found one metre high on small Nikau palms, tree stumps and also two metres high at the top of a flax blade. 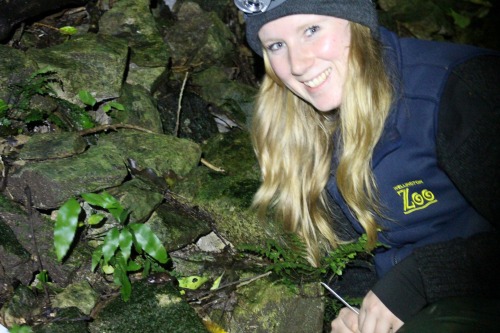 I was doing the monitoring with five other people where we went out at night in two groups of three to separate grid sites on the island and looked for the frogs. We would spend three to four hours each night looking for Maud Island Frogs as they mainly live in moist rocky areas with lots of hiding places. Being nocturnal and terrestrial they come out of their hiding places at night to catch little insects and bugs.

Maud Island Frogs are very small, about 11-50mm snout vent length (SVL) which is about the size of a small match box and smaller. They also have permeable skin which makes them look wet and glossy, so they can be very hard to find especially when they look like small wet leaves. 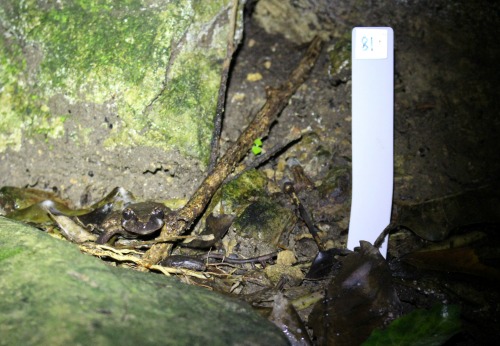 Once we find the frogs we ID, weigh and measure them, then we mark the coordinates and place them back in the same place. One frog that I found was 13.3mm SVL and 0.27g, this frog that I named 'Dot' was a yearling and was no bigger than a 20 cent coin. This shows that the frogs are breeding and in future years when this frog is found again, data will be collected of it growing up. 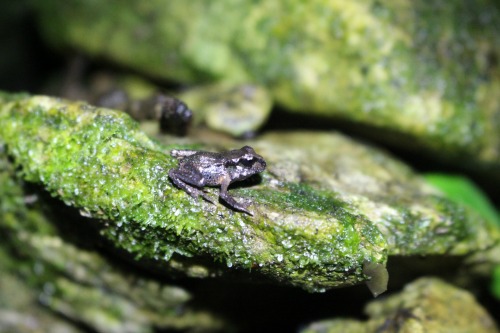 Maud Island Frog on the island

Annual monitoring of Maud Island Frogs provides a better understanding of population dynamics for such an isolated, evolutionary distinct frog and its environment. This information can help manage their population and ensure their survival. 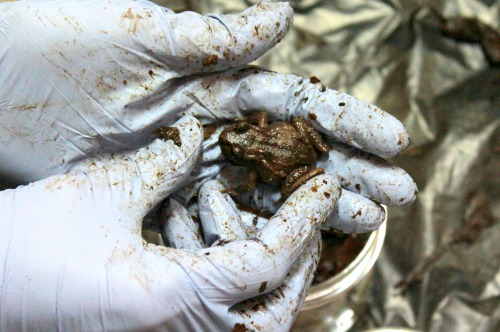 Wellington Zoo is working alongside the frog recovery group, Zealandia, the Department of Conservation, and Victoria University with Ben Bell to support the ongoing study of Maud Island frogs. The research on Maud Island is providing lots of information to contribute to the longstanding study of these special native frogs. 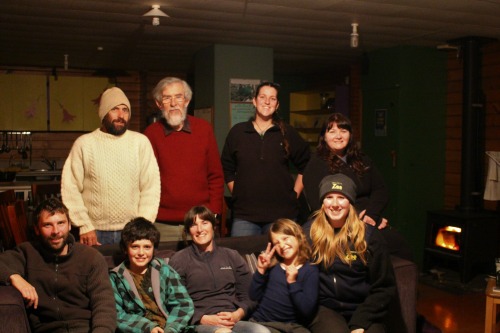 I would like to thank Wellington Zoo and the Wellington Zoo Conservation Fund for the opportunity to come to Maud Island to see where our frogs are from and learn more about them. I would also like to thank Frank, Sue, Heeni and Piripi for all their help and hospitality on the island and the frog monitoring team organised by Ben Bell for such an amazing learning experience.