An injured nationally vulnerable Kākāriki has been receiving care at the Zoo after it was found with severe wounds to his right wing, thought to have been caused by a cat. 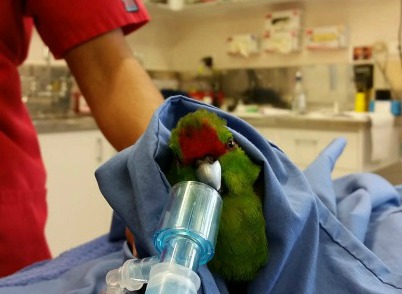 Originally hatched at Zealandia Wildlife Sanctuary in March, the male Kākāriki was brought in by a member of the community and is receiving treatment from the Veterinarian Team at The Nest Te Kōhanga.

When the Kākāriki arrived at the Zoo, the initial physical exam showed the bird had a lot of wounds and bruising over his body, including a large deep wound to the underside of his right wing, plus many primary and tail feathers were missing. The bird’s wounds are consistent with a cat attack, so our vet team are treating him with antibiotics to prevent infection to his right wing, and pain relief and anti-inflammatories for the bruising and swelling.

Our vets dressed and bandaged its wing to help it mend, and the bird is also receiving physio about twice a week under a general anaesthetic. With ongoing treatment and rehabilitation, our vet team are hopeful that the bird will regain its strength to be able to be released back to the wild.

The Kākāriki will remain at The Nest Te Kōhanga for ongoing treatment and care for the next few weeks until the bird’s wing has healed and finished its therapy.

We hope to release the bird once it is healed and fit to fly, as saving native wildlife is a crucial part of the work our vet team do at The Nest Te Kōhanga.

We work together with the community and other organisations to ensure these animals get the treatment and care they need, and ultimately return them to the wild.

You can help protect our native birds like the Kākāriki by keeping your cats inside at night and making sure your cat is desexed.

Native species make up at least 70% of patients at The Nest Te Kōhanga, and patients are usually brought in by local members of the community, the SPCA, the Department of Conservation and Zealandia.