Hi everyone! My name is Holly and I am one of the Zoo Keepers here at Wellington Zoo. Every year Zoo staff have the opportunity to take a week of paid leave to give back to a conservation organisation of their choice, and this year I chose The Yellow-Eyed Penguin Trust. 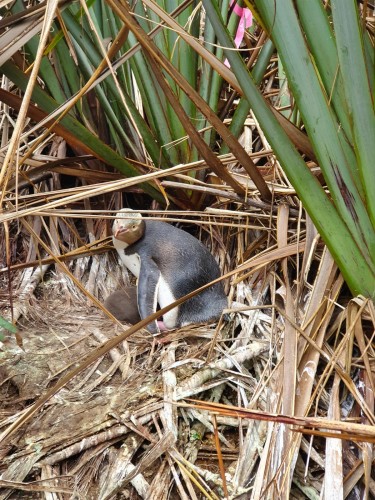 Yellow-eyed penguins (Hoiho) are an iconic penguin that is endemic to New Zealand but unfortunately their numbers are declining. The Yellow-Eyed Penguin Trust was set up 1987 and owns or manages numerous reserves in North Otago, across the Otago Peninsula, and in the Catlins with the aim of saving these endangered penguins by restoring coastal forests and controlling predators. 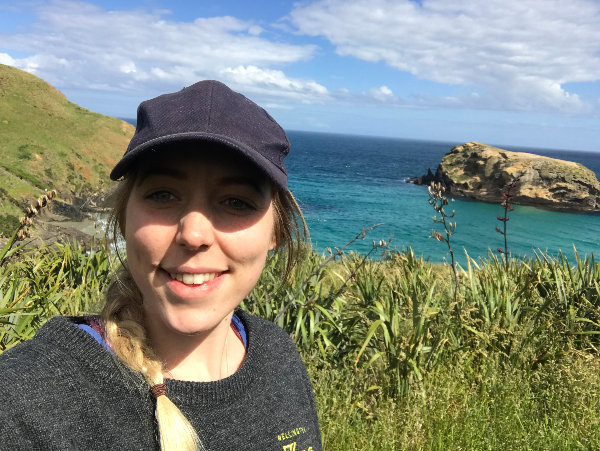 Holly in the field

In December I had the pleasure of working alongside Ranger Ben at the end of the Hoiho chicks hatching season. During the hatching season, one parent will always guard the chick and its nest whilst the other parent goes out to sea to forage for food. Although, at this stage, the chick is always guarded by at least one parent they are still vulnerable and face many threats.

Most days we would head to one of the reserves in North Otago or the Peninsula to monitor the chicks and their progress, however getting to the nests was not always easy but it was always fun! Typically getting to a nest would involve some off-roading, walking across beaches (whilst trying not to disturb the resident seals and sea lions) and finally a small amount of climbing. Hoiho tend to pick their nests in these remote locations so that they can stay hidden away. As a result of these remote locations, track maintenance was essential and one morning we filled in a big pothole to ensure the vehicle we were using could get across the track to the nesting sites. 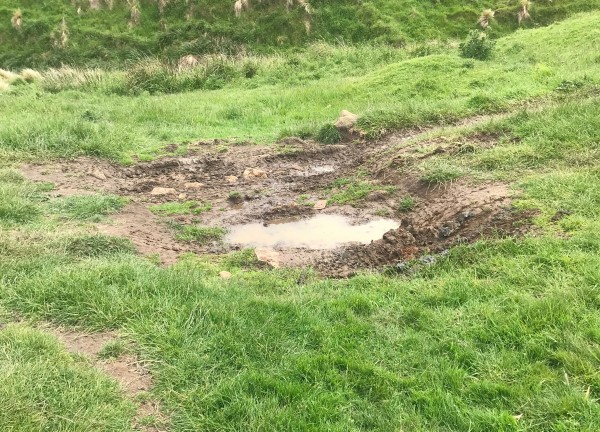 Track before we filled in the pothole 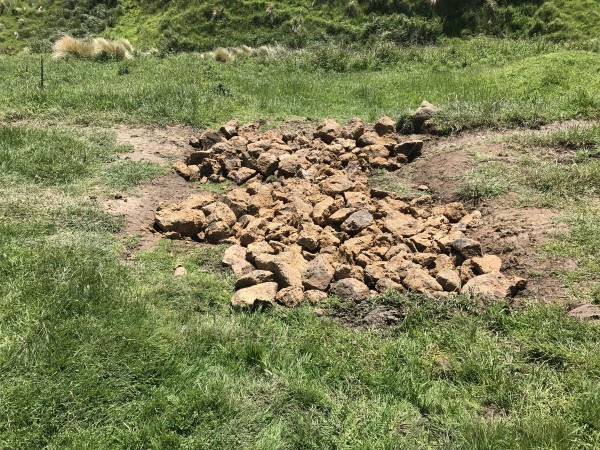 Track after pothole was filled in

Once we arrived at each nest, the parent still remaining would be visually checked by Ben to ensure they looked healthy. We would then scan the penguin for a microchip using a transponder to identify which parent remained at the nest. Once the penguin was identified and checked we would weigh the chicks using a specialised bag that allowed the chick to sit comfortably, a scale was then attached to the bag and their weight was taken and recorded to ensure the chick was getting enough food from its parents and gaining a healthy amount of weight. Penguins are susceptible to a number of infections and parasites so a basic health check was carried out on each chick in search of any symptoms of disease, in particular, Avian diphtheria. Avian diphtheria is identified by bacterial plaques in the mouth which can lead to further complications such as blockages and dehydration. This is a disease which commonly affects young chicks and if a penguin chick is found to be showing symptoms, this will be treated with antibiotics. Thankfully, all of the chicks we checked throughout the week were healthy and had recovered from any Avian diphtheria. 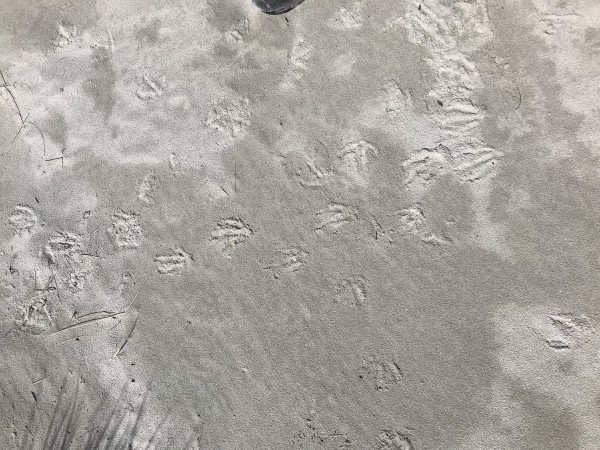 During the beginning of the breeding season, The Yellow-Eyed Penguin Trust go out in search of nesting sites. Hoiho tend to come back to the same areas to breed every year but there is always the chance that they might move or a new pair begin to breed and are yet to be found and because of this, Ben always kept his eye out for evidence of new nesting sites. One afternoon we went in search for new breeding sites, we found lots of evidence of penguins using the area such as footprints heading out and returning from sea on the beach, faeces, urates and penguin sized pathways in the bush. Unfortunately we did not find any new breeding pairs/sites, but it is always worth a look just in case! 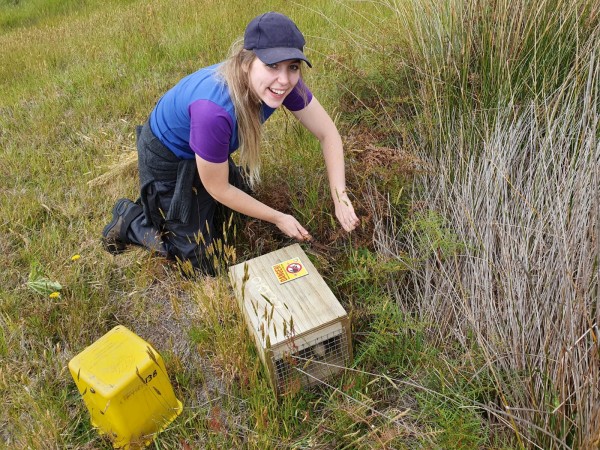 Holly resetting and baiting a trap

When we weren’t monitoring the chicks we would head out to check the invasive mammal traps. Checking the traps involved clearing the area around them, clearing inside the traps and then re-baiting them. At every trap we recorded what we did and what we found, this then went into a database which can be used to identify the number of invasive mammals in that area. Invasive mammals such as stoats and ferrets are one of the biggest threats affecting Hoiho. It has been recorded that chick mortality can be as high as 60% without it and therefore pest management is essential for the Hoiho to thrive in their habitat. 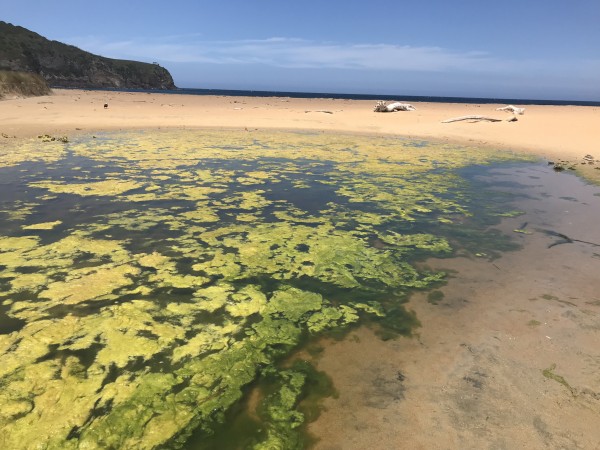 Stagnant water we tested for mosquitos

Another pest affecting Hoiho numbers is mosquitos. They are able to transmit a blood parasite which causes avian malaria, affecting both adult penguins and their chicks. Mosquito numbers are likely to increase over the coming years due to climate change leading to more favourable breeding opportunities for them. The Yellow-Eyed Penguin Trust is currently carrying out research into the number and species of mosquitos found at their reserves. During my time with the Trust, more mosquito traps were set up and we took samples from any stagnant water (the perfect breeding area for mosquitos) which would be analysed at a later date to identify if any mosquitos were present and if so what species of mosquito are living around the penguins. 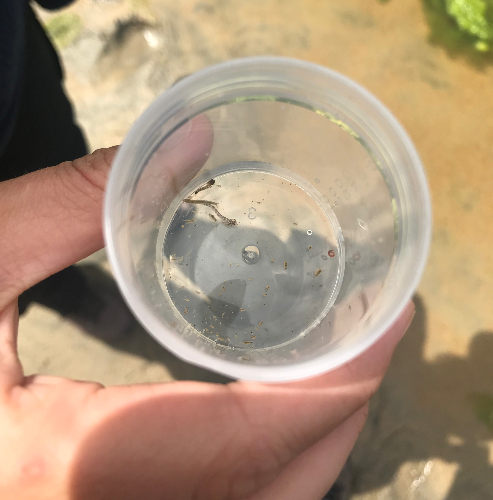 The Yellow-Eyed Penguin Trust is making every effort to save Hoiho from their declining numbers and I would like to thank them for the incredible experience and knowledge they shared with me. I would also like to thank Wellington Zoo for the opportunity to spend this time with The Trust, I feel very lucky to have had the opportunity to spend the week surrounded by stunning scenery, learning about New Zealand’s Bird of the Year.