Wellington Zoo’s Meerkat mob has welcomed four new pups into the family! Only three weeks old, the pups are developing well and have opened their eyes. However, it is still too soon to tell their sex. 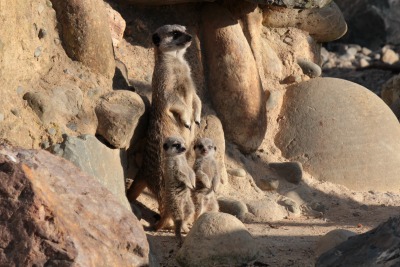 The curious Meerkat pups have already started to venture outside of the den, so it won’t be long until they start to learn and practice how to do sentry duty from watching their parents. While the pups are young, they will still spend a lot of time in the safety of their den where the females will share the parenting, while the males focus on sentry duty around the burrow.

The pups will still be fed milk for at least a few more months and then at around 6 weeks old, they will start to learn to hunt and eat solids from their parents, such as bugs and other juicy insects.

Our Meerkat mob consists of two males and three females. A Meerkat mob can range anywhere from three to fifty Meerkats, all led by a dominant female.
See if you can spot our mischievous Meerkat pups sunbathing outside their burrow, or practicing their sentry duty next time you’re at the Zoo!

Sentry duty is one of the most important roles of a Meerkat. One Meerkat will stand on its hind legs and act as a lookout while the rest of the mob is outside looking for food or sunbathing. The guard will alert the rest of the group with a special bark if a predator flies over or approaches.

Learn more about our Meerkats.