With support from the Wellington Zoo Conservation Fund, Marketing and Communications Advisor, Ash Howell is in Vietnam for just over 3 weeks to work with Fauna & Flora International. While Ash is over in Vietnam, she will be helping to create a social media strategy to help with raising awareness around Vietnam’s unique biodiversity. 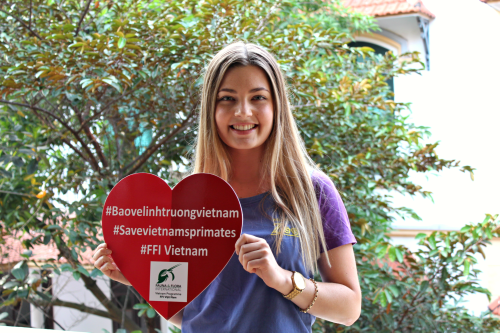 I have been working with the team from FFI in their Hanoi based office for a week now and so far, it’s been absolutely incredible!

This past week I have been working on collating data from FFI’s Facebook page which has helped me to have a better understanding of their audience, find ways to communicate their key messages and how to do so in a relevant and engaging way. 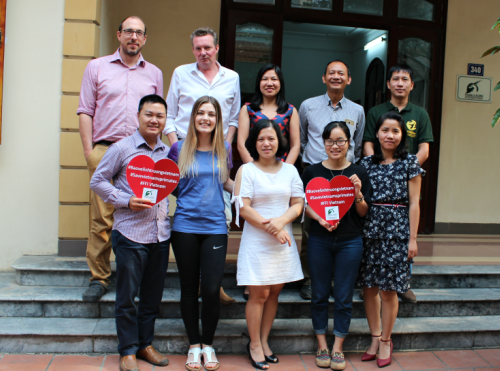 Ash with the Hanoi based team at FFI

At the beginning of last week, I was also lucky to be involved in the recruitment process of FFI’s new Communications intern. Our chosen candidate will be starting with the team this week so I will be able to work closely with them in my remaining weeks, sharing knowledge and resources as well as training.

During our interviews, I discovered that many Vietnamese people have little to no idea about the primates that live within their own country. Vietnam is home to some of the world’s rarest and unique primates like the Tonkin Snub-nosed monkey, the Red-Shanked Douc Langur, the Delacour Langur and even the Cat Ba Langur. It’s perplexing to think that so many people in Vietnam are unaware of the incredible biodiversity in their own country but there hasn’t been a lot of education surrounding conservation and support for it. This concern has reinforced my overall goal for this trip – assisting FFI with a social media strategy that will overall boost awareness of Vietnam’s flora and fauna and the work that FFI are doing to save it.

While there are many notable primates in Vietnam, I am here to support one species in particular – the critically endangered Northern White-Cheeked Gibbon. The Zoo is home to two beautiful White-Cheeked Gibbons; Robyn and Vilson. They play a large role in advocacy for their wild counterparts and the largest wild population is said to be in Pu Mat National Park – it is thought that there may be around 130 groups in this area.

As part of the Zoo’s support for FFI through the conservation fund, we co-fund the White-Cheeked Gibbon project in Pu Mat with two other Australasian zoos. The Zoo supports the work that FFI is doing surrounding the improved enforcement and protection of key habitat areas to reduce the impact of hunting and habitat loss. FFI also works with local communities to increase forest protection and education. 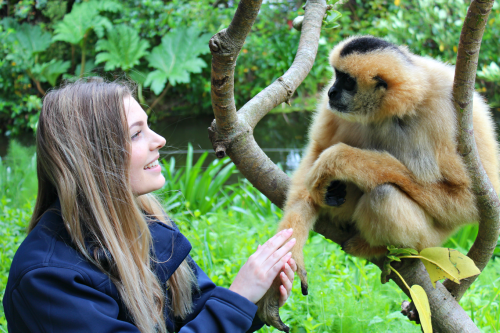 Ash with one of the Zoo's White-Cheeked Gibbons, Robyn

Later this week we will be heading to Pu Mat National Park so that I can gain a better understanding of the field work that FFI does, hopefully get some good content and maybe/with any luck, hear the morning duet of wild White-Cheeked Gibbons.

I feel incredibly lucky to have the support from the Zoo's conservation fund - without it I wouldn't be here assisting our conservation partner, FFI.

Stay tuned for my next blog – I will try to get some awesome video footage to share with you all!