With support from the Zoo's Conservation Fund, Amy Saunders, the Zoo's Acting Team Leader of Carnivores is currently in Laos working with one of the Zoo’s conservation partners, Free the Bears. 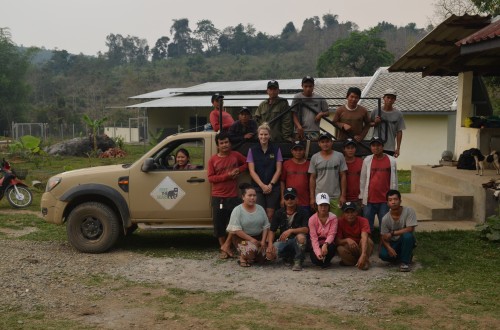 Amy with some of the staff from Luang Prabang Wildlife Sanctuary

Well, my time here in Laos has almost come to an end. It’s been such an incredible experience having the opportunity to spend time with one of Wellington Zoo’s conservation partners, Free the Bears, at their two bear sanctuaries in Laos.

It’s hard to put into words how amazing my time here has been. It’s been quite overwhelming and challenging at times to learn of the bears’ previous lives prior to their rescues, but on the flip side it’s been so heart-warming to see the bears thriving now. Sadly, the wild isn’t always the utopia we wish it was for animals. For the bears at the Free the Bears’ sanctuaries, releasing the bears back into the wild isn’t currently an option as the risk of them being re-captured or killed by poachers is too high. Today though, these rescue bears can explore large habitats, feel grass underneath their feet, dig in the dirt, play with other bears, interact with enrichment, eat a nutritious diet, drink clean water, and receive the best veterinary care. The list goes on. The bears in the sanctuaries here are such gentle giants and the way they’ve learned to trust humans again is a true reflection of their character and the dedication of Free the Bears. 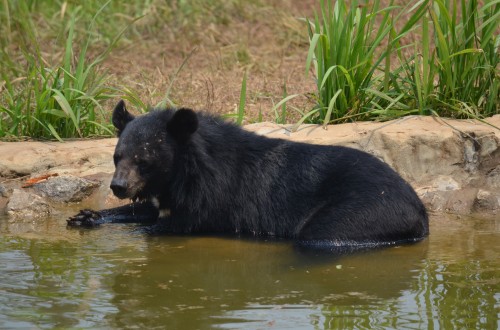 During my time in Laos, I’ve been fortunate enough to spend time with two male Moon Bears who were only rescued by Free the Bears a month or two ago. Both malnourished and very small for their age, it’s been amazing to see the beginning of their transformation. When I first met them, one bear in particular was quite nervous and unsure, but now his little personality has started to come alive. It’s been so special to see him looking much more relaxed, playing with enrichment, and sleeping in his hammock. His life is only going to get better, and I have a feeling he’s starting to realise that now too. 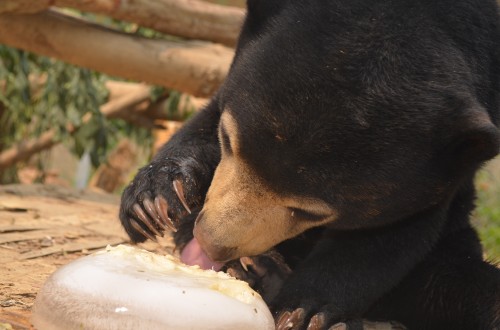 Sadly, there are still so many bears that need rescuing from the illegal wildlife trade in Laos and further abroad. When it comes to bile farming in Laos, there are estimated to be at least 120 bears being kept illegally in bile farms. Bile is being extracted from the bears for use in traditional Asian medicine. Unfortunately, Laos remains one of the poorest countries in the region, so rescuing these bears has been challenging as issues such as human development and poverty have often taken precedence over wildlife protection. In the past, government authorities have raised their difficulties in enforcing the law around bile farming if there isn’t anywhere for the bears in bile farms to go. The establishment of Free the Bears Luang Prabang Wildlife Sanctuary offers a solution to this issue and at zero cost to the Laos Government, enabling the designated government authorities to enhance their efforts in shutting down the bear bile farms. 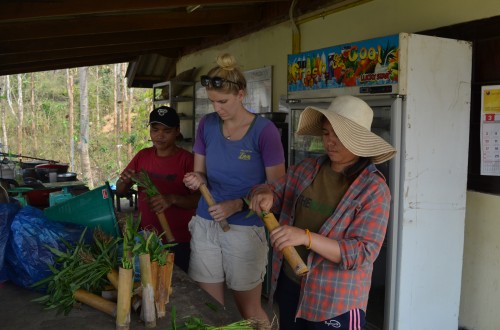 Amy making some enrichment with the Keepers

I want to thank Free the Bears for having me over in Laos. It’s been such a privilege to spend time with the bears and other animals here, but also the amazing staff. The Keepers have been so welcoming of me and it’s been a pleasure to share some of my Zoo Keeping knowledge and bear experience with them. I will be so sad to say goodbye to all the animals, particularly some of the bears I’ve been spending lots of time with, but I look forward to sharing the information I gained at Free the Bears with the staff at Wellington Zoo and our Zoo community. 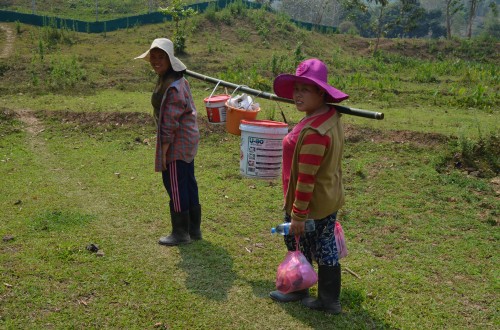 The more informed we all are about animals such as bears and the threats they face, the better positioned we are to help protect and preserve them. There’s a famous quote by Baba Dioum that sums it up for me. It says, "In the end we will conserve only what we love, we will love only what we understand, and we will understand only what we are taught.”

Lastly, I want to say a big thank you to Wellington Zoo’s Conservation Fund for providing me with the opportunity and support to do this trip. Conservation is at the heart of everything we do at Wellington Zoo. In addition to what we do for conservation within the Zoo, contributing to conservation in the field is vital to us. In partnering with reputable organisations like Free the Bears, we are not only supporting the protection and preservation of wild animal populations such as bears in Asia, but we can apply the knowledge and skills we gain through such conservation partnerships to further excel and lead the way in our own animal care at the Zoo.

Danni reports on her time in Madagascar