My name is Amy and I’m the Acting Team Leader of Carnivores at Wellington Zoo. With support from the Zoo's Conservation Fund, I’m currently in Laos for four weeks working with one of the Zoo’s conservation partners, Free the Bears. 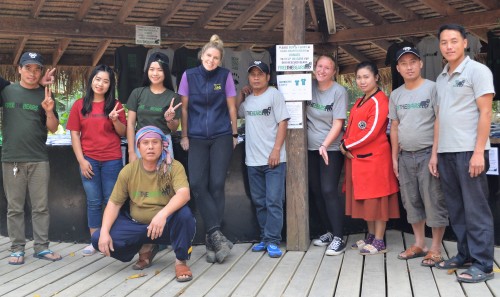 Free the Bears was founded by Mary Hutton in 1995 to protect and preserve bears across Asia from the illegal wildlife trade. For decades poachers have killed or captured bears from the wild via hunting or snare traps to then sell the bears locally or smuggle them further abroad. In the 24 years since it was first established, Free the Bears has rescued hundreds of bears from poachers, exotic pet owners, or from people planning to use bear parts or the bear’s bile in traditional medicine. Over 220 of these bears (both Sun bears and Moon bears) are now cared for in sanctuaries established by Free the Bears in Cambodia, Vietnam, and where I am, in Laos. 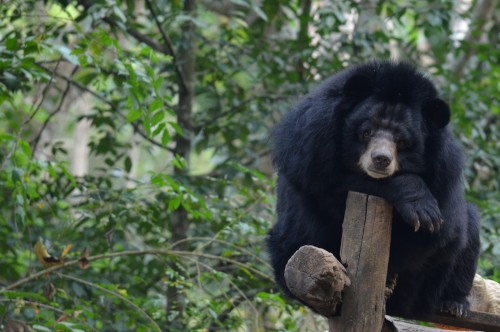 Moon Bear at the sanctuary

I’m so excited and feel very privileged to be here working with Free the Bears as they’re an organisation that I have huge admiration and respect for. Having worked with a Sun bear at Wellington Zoo, Sean, who was initially rescued by Free the Bears after being found as a cub chained up outside a shop in Cambodia, I’ve seen first-hand how Sean’s quality of life benefited from having been rescued all those years ago. Sadly, Sean passed away at Wellington Zoo last year at the age of 22, but his story continues to live on through his daughter, Sasa, who was born at Wellington Zoo and is an incredible ambassador for her wild counterparts. 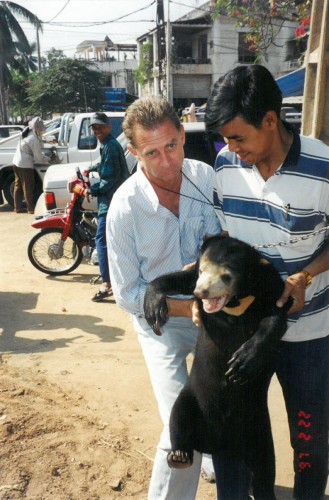 Sean being rescued as a cub 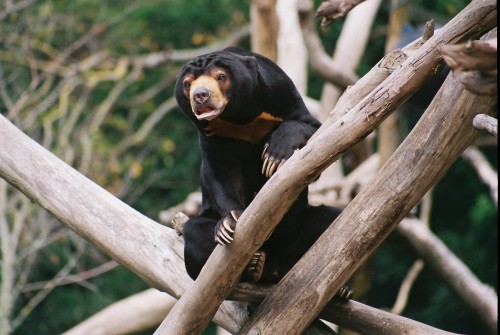 Sean as an adult at Wellington Zoo

After leaving Wellington more than 24 hours prior, I finally landed in the very small airport of Luang Prabang in Laos where I was greeted by Matt Hunt, the CEO of Free the Bears, and his two dogs, Brown and Hera. Matt took me to the Free the Bears office which was going to be my home for the next couple of nights. After having some time to settle in here and explore Luang Prabang, I was picked up a day or two later by Lar (the Animal Manager), Tak (the Program Manager), and Kath (Free the Bears’ Vet in Laos). We drove about 45 minutes south of town to Free the Bears Tat Kuang Si Bear Rescue Centre which was established in 2003 in collaboration with the Laos Department of Forestry. On the way we stopped to collect enough fresh fruit and vegetables to feed all the bears at the rescue centre before Free the Bears replenished it all again a few days later. Moon bears are thought to eat about 10kg of food in the wild per day. At the rescue centre there are currently 38 Moon bears living in large, forested habitats, so that’s a lot of food that needs to be supplied to the bears! 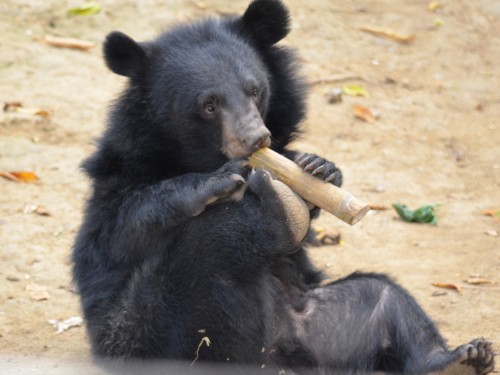 While I’ve been at the rescue centre, I’ve been shadowing the Keepers and helping them with daily husbandry tasks including making enrichment for the bears and training and conditioning. We even revamped the bear nursery here with new enrichment items including logs with holes drilled into them to hide the bears’ food in, fresh browse, sand to dig in, and new toys and tactile items for the bears to play with. 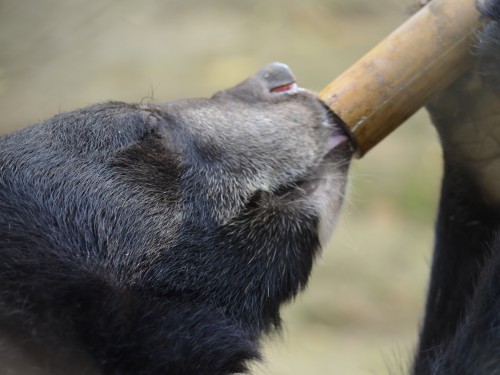 There are seven Keepers here, all local to Laos, and with my Laos vocabulary very much lacking it makes the conversation and hand gestures between us quite entertaining at times! Resources are often a bit limited or difficult to obtain in Laos, but thankfully there is plenty of bamboo that we can use to our advantage when it comes to making enrichment. Just the other day, the Keepers and I made bamboo tubes filled with pieces of watermelon and banana leaves to give to the bears. Something as simple as this was so enriching and fun for the bears and encouraged them to exhibit natural foraging behaviours like prying open the bamboo with their mouths and using their long claws to get the food out. Many of the bears hadn’t had watermelon before, so some were a little cautious at first and others couldn’t get enough! 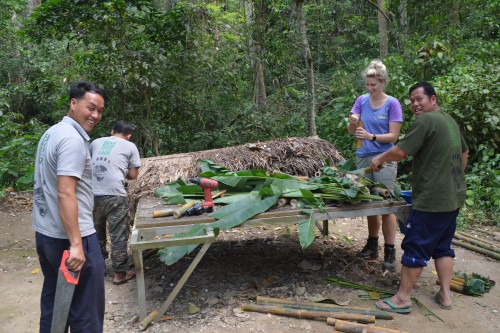 Amy helping some of the Keepers make enrichment for the bears

During my time here I’ve also been fortunate enough to see and be involved in a health check on a Moon bear named Bobby who was rescued last year. All the rescue bears that come into the care of Free the Bears receive an initial check-up to assess their body condition and determine whether they might have any underlying health issues or not. Bobby is four years old and was found in a corn field as a cub after his mum was likely killed or scared away. Bobby was put into a cage where he lived for three years before being rescued by Free the Bears. Free the Bears had to cut Bobby from the cage he was in as the door was built for a cub and was too small for him to get out. Despite his rough start to life, Bobby thankfully passed his health check with flying colours! 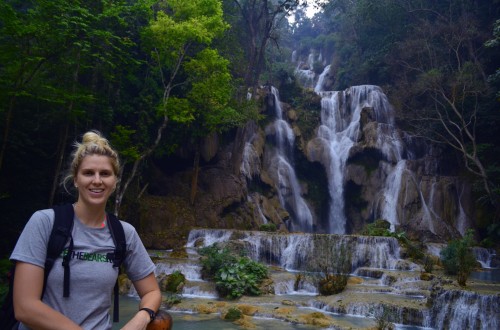 While I’ve been at the rescue centre, I’ve also made the most of swimming in the famous Kuang Si waterfalls which are right by the rescue centre. Water downstream from the waterfalls literally runs through some of the bears’ habitats making the perfect pools for the bears to swim in! Each year thousands of visitors pass through the rescue centre on their way to the waterfalls, enabling visitors to see the bears close-up and learn their stories. Knowledge is power when it comes to conservation. Having the rescue centre within walking distance of Luang Prabang’s most famous tourist attraction provides Free the Bears with the ideal platform to educate people from all over the world and gain further support in their fight to end the exploitation of bears across Asia. 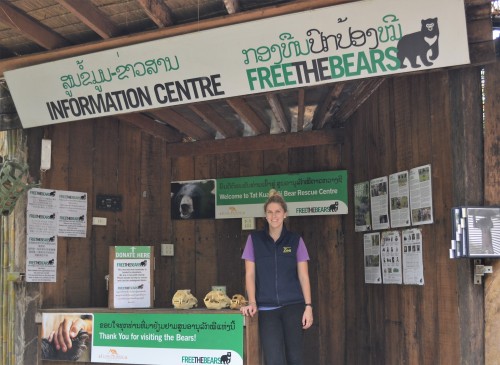 That’s it from me for now. Stay tuned for my next blog as I’ll be heading to Free the Bears’ new sanctuary in Laos, Luang Prabang Wildlife Sanctuary, which is home to another 23 moon bears, lots of other rescued wildlife, and a cute Sun bear cub named Mary! 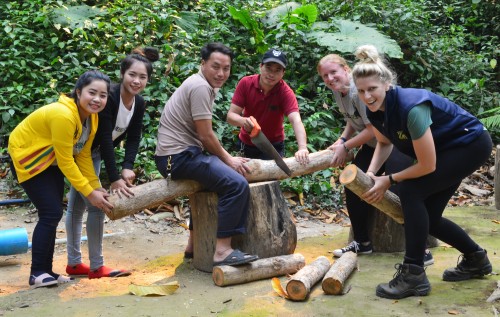 Amy with some of the Keepers making enrichment for the bears 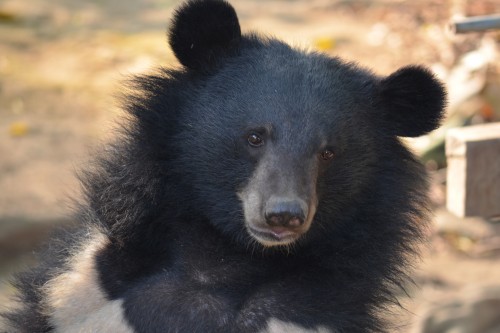 A beautiful Moon Bear at the sanctuary 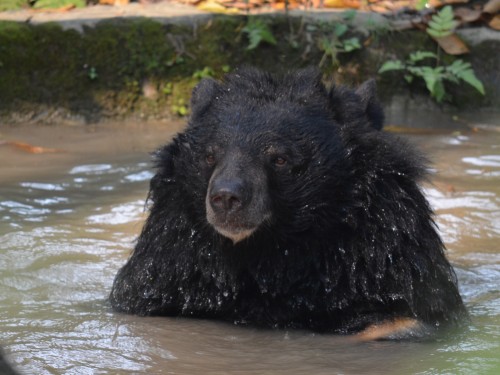 A beautiful Moon Bear at the sanctuary

Beni the Chimpanzee passes away